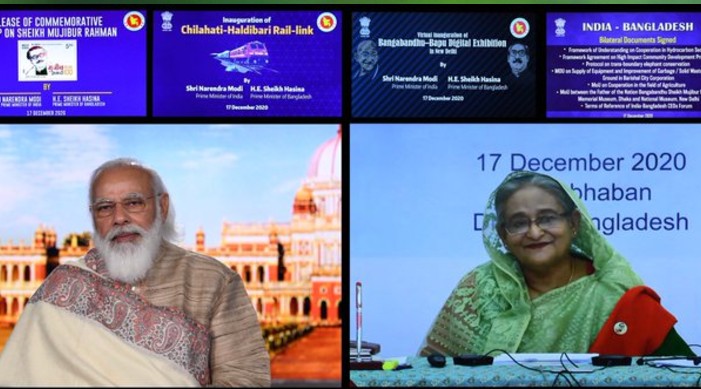 PM Modi in a virtual summit with Bangladesh PM Hasina

India-Bangladesh special partnership has been advancing not only in the health sector but also in other areas, PM Modi said

Holding the bilateral summit through video conference, he said though this year has been challenging due to the global epidemic, “but it is a matter of satisfaction that India and Bangladesh had a good cooperation in this difficult time.”

“Whether it were medicines or medical equipment, or working with health professionals. We are also having good cooperation in the field of vaccine. We will also take special care of your needs in this regard,” Prime Minister Modi said. He thanked Bangladesh for its contribution under SAARC framework. He maintained that India-Bangladesh special partnership has been advancing not only in the health sector but also in other areas.

“We reduced barriers in the land border trade and expanded connectivity between the two countries. All this reflects our intentions to further strengthen our relationship,” Prime Minister Modi said.

During the summit, the two leaders jointly inaugurated a Bangabandhu-Bapu digital exhibition, a pre-1965 railway link, released a commemorative stamp on Sheikh Mujibur Rehman’s birth centenary and signed seven pacts to form an India-Bangladesh CEOs forum with IT sector as a priority area.

In the meanwhile, Bangladesh PM Sheikh Hasina paid homage to the martyrs of the 1971 war. “I pay my gratitude to the government and people of India who extended wholehearted support for the cause of our liberation,” she said. Hasina also commended the Modi government over its handling of the pandemic.

The Bangabandhu-Bapu digital exhibition will be displayed in New Delhi, and subsequently in different locations in Bangladesh, the United Nations and finally culminate in Kolkata in early 2022.

India and Bangladesh also signed seven MoUs during the summit, which included cooperation between the two countries in the hydrocarbon sector, granting of financial assistance for implementation of High Impact Community Development Projects through local bodies and other public sector institutions.