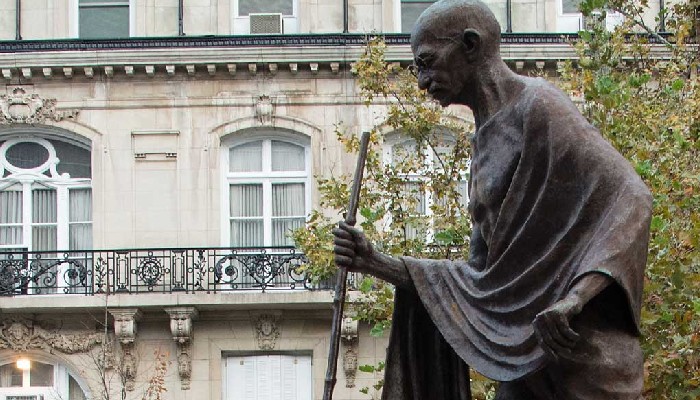 India has strongly condemned the defacement of the Mahatma Gandhi statue in Washington by miscreants “masquerading” as ant-farm protestors. It has demanded an early investigation into the matter.

During a weekly press briefing, Ministry of External Affairs’ spokesperson Anurag Srivastava said, “We've strongly condemned this act of vandalism against a universally respected icon of peace and justice by miscreants masquerading as protesters. Our mission has strongly taken this up with the concerned US authorities and we have sought an early investigation as per applicable law.”

The MEA spokesperson further said this matter was also being taken up with the US Embassy in New Delhi, and a similar message was conveyed to the authorities in the US.

Last week, Mahatma Gandhi's statue was vandalised during protest against the recently enacted farm laws in India, posters and banners were seen pasted against the statue and a yellow flag mark ‘Khalistan’ was draped over it. Some people were also seen waving “Khalistani” flags and raising pro-Khalistan slogans.

The US-based Indian embassy had condemned the incident, terming it as a mischievous act.

“The statue of Mahatma Gandhi at the Mahatma Gandhi Memorial Plaza in front of the embassy was defaced by Khalistani elements on 12 December 2020. The Embassy strongly condemns this mischievous act by hooligans masquerading as protesters against the universally respected icon of peace and justice,” said the embassy.

Following this incident, White House spokeswoman Kayleigh McEnany on Tuesday said that the act was “appalling” as Gandhi fought for values like peace, justice and freedom, which the US represents.

Earlier, the State Department said that it takes “safety and security of foreign missions in the US very seriously” and it is in discussion with the Indian Embassy in connection with the incident that occurred during an anti-farm laws rally in Washington.