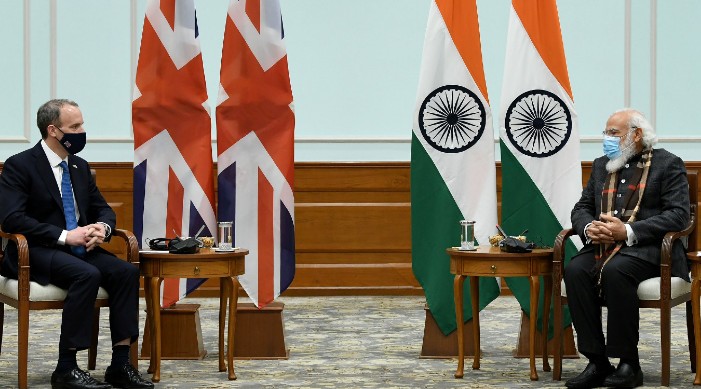 Visiting UK Foreign Secretary Dominic Raab on Wednesday called on Prime Minister Narendra Modi and discussed ‘various facets of the strategic partnership’ between the two nations. Dominic Raab is on a four-day visit to India.

In a tweet, Ministry of External Affairs’ spokesperson Anurag Srivastava wrote that both leaders discussed various facets of strategic partnership between the two countries.


On December 15, the UK Foreign Secretary met External Affairs Minister S Jaishankar and discussed the immense opportunities for greater collaboration in diverse sectors in the context of UK leaving the EU and the big geopolitical changes in a COVID-impacted world.

At a press conference, the EAM said, “A lot of our time today was spent on how to give policy directions to broaden cooperation and encourage more activities and collaborations. We focused on five broad themes which were connecting people, trade and prosperity, defence and security, climate and health.”

It is important that India and the UK strengthen their collaboration to hasten the post-COVID economic recovery, he added.

Similarly, Raab said, “Now we want to take that to another level working towards agreeing an enhanced trade partnership next year which itself would be a stepping stone for the future free trade agreement.”

According to the MEA, the bilateral trade with the UK has witnessed a steady rise in the last decade reaching US $15.48 billion in 2019-20.

So, in order to tap the full potential of bilateral trade and economic relations, both sides recognised the importance of fast tracking the discussions on a trade deal as well as concluding a comprehensive migration and mobility partnership agreement that can facilitate swifter movement of students and professionals in both directions.

The two sides also recognised defence partnership as one of the important factors to encourage the partnerships. India and the UK agreed on key elements of a 10-year ambitious India-UK roadmap also known as the ‘quantum leap’ focusing on enhancing the partnerships over the next 10 years.

To discuss the same, the UK Foreign Secretary also met with Minister of Environment,Forest and Climate Change Prakash Javadekar and discussed the shared ambition to shift the dial on climate change.

In a tweet, Raab wrote, “As #COP26 Presidents, the UK will be working closely with India to tackle climate change. India has ambitious targets, including 4509GW renewable energy by 2030. I met @PrakashJavadekar to discuss our shared ambition to shift the dial on climate change.”


As #COP26 Presidents, the UK will be working closely with India to tackle climate change. India already has ambitious targets, including 450GW renewable energy by 2030. I met @PrakashJavdekar to discuss our shared ambition to shift the dial on climate change. pic.twitter.com/GK6x3aWDPv


Apart from that, he also met with Minister of Education, Ramesh Pokhriyal in Delhi. In the second leg of his tour, he will be visiting Bengaluru where he will meet the Chief Minister of Karnataka on December 17.