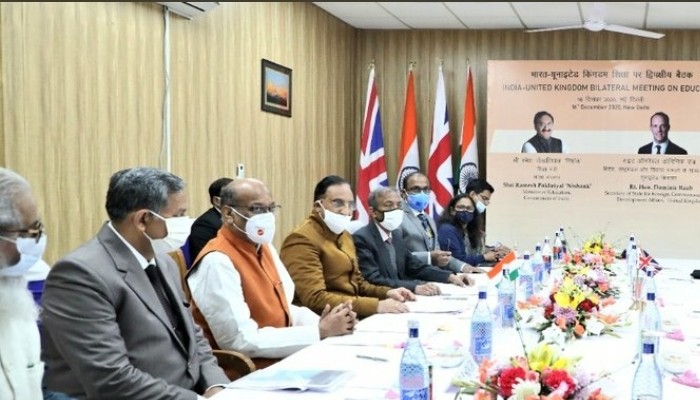 India and the United Kingdom (UK) have expressed the resolve to further strengthen their educational collaboration in a bilateral meeting held on Wednesday. Both sides agreed to deepen their engagement in the field of education and research and work collaboratively on mutual recognition of academic qualifications over the next year.

The meeting was held between Education Minister Ramesh Pokhriyal ‘Nishank’ and Foreign Secretary of the UK Dominic Raab.

According to an official statement by the Ministry of Education, the two sides have agreed to set up a joint Task Force consisting of designated higher education organizations from both countries to work towards mutual recognition of academic qualifications.

“The composition of the Task Force and its modalities are to be decided at official levels,” the statement read.

Speaking on the occasion, Education Minister Pokhriyal said that setting up of a joint task force will expedite the process for achieving mutual recognition of academic qualification. This will support India’s agenda for the internationalization of higher education.

He further said the relations between the two countries have been very positive and cooperative. Today’s agreement signifies continued mutual trust between them to elevate ties through education, research, and innovation.

The UK Foreign Secretary hailed India’s National Education Policy 2020 as visionary and said the proposed reforms will open up opportunities for students, the economy, and for deeper engagement and collaboration between the two countries.

He said the UK has a lot of respect for the academic rigor coming out of India, and the contribution of the Indian student community is highly valued by his country. He also informed that the UK has made several changes in their visa and immigration rules to facilitate student mobility.

Both sides expressed hope and confidence that they would further enhance mutual engagement in the field of education, research, and innovation, leading to deeper and stronger bilateral relations.

The meeting was also attended by the Minister of State for Education Sanjay Dhotre, Secretary, Higher Education Amit Khare, and other senior officials of the Ministry.