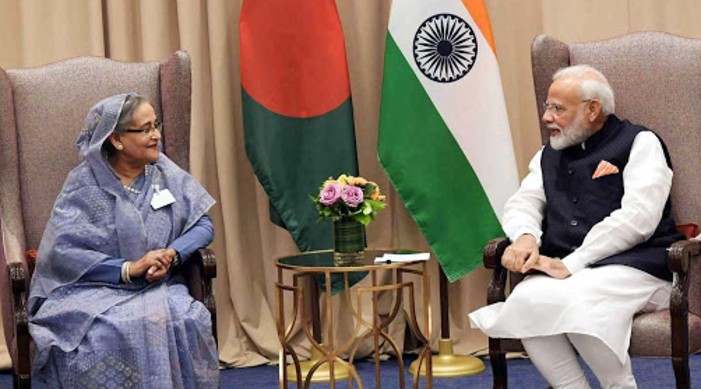 During the virtual summit between Prime Minister Narendra Modi and his Bangladesh counterpart Sheikh Hasina on Thursday, both leaders are expected to ink nine Memorandums of Understandings (MoUs) to further the bilateral relations.

This was disclosed by Bangladesh Foreign Minister AK Abdul Momen during his talks with Dhaka Tribune.

“It is likely as many as nine MoUs on different sectors will be signed during their virtual meeting…but these are yet to be finalized [while] they [officials] are still working on it,” he was quoted as saying to Dhaka Tribune.

The meeting of the two leaders on a virtual platform would among other things witness the reopening of an old railway link, the Chilahati-Haldibari rail route, after 55 years since it was snapped during the India-Pakistan war in 1965 when Bangladesh was part of Pakistan.

One of the nine MoUs, Momen hinted, could be related to water sharing in common rivers. He said Dhaka would seek to bring under a single framework the issues of seven major transboundary rivers – the Monu, Muhuri, Gomti, Dharla, Dudhkumar, Feni, and Teesta.

He said the Surma-Kushiwara project would also be on the agenda of the JRC talks, which last took place in New Delhi 10 years ago in 2010.

With regard to cooperation on the Covid-19, there will be a MoU between Beximco Pharma with the Serum Institute for priority delivery of 30 million doses of prospective Covid-19 pandemic.

Further, Dhaka would also seek India’s enhanced engagement in resolving the Rohingya crisis at the UN as Bangladesh extended its support for its temporary membership at the UN Security Council this year, according to Momen.

Bangladesh would also re-convey its concern over India’s Border Security Force (BSF) actions claiming the lives of Bangladeshis along with the frontier areas, said Momen.

According to Momen, Bangladesh would urge New Delhi to take some effective measures to reduce the bilateral trade gap to strengthen further trade cooperation between the two neighbors.

Another agenda of the meeting would be an expedition of the implementation of projects under the Line of Credit (LoC).

“We have already formed a committee including Bangladesh foreign secretary and Indian high commissioner to Bangladesh to monitor projects under the Indian credit line,” he was quoted as saying in the report.

Further, Momen said that Bangladesh would seek to reestablish other connectivity modes, restoring land borders and railway links to resume travel of mass people besides the air bubble arrangement.

He further noted that the two leaders are set to jointly declare as “Shawdhinota Sark” (Independence Road) an existing two-kilometer road on zero lines along Bangladesh’s western frontier at Mujibnagar in Meherpur. He said the road at the site, where the first Bangladesh government was sworn-in in 1971, would be open for people of both the countries to be cleared at immigration check posts.

Besides, Momen said the two leaders’ virtual meeting is set to be followed by a joint inauguration of some projects completed already under the Indian credit line.

These included, Momen said, simultaneous parade in New Delhi and Dhaka, the launch of a joint website on 50 years victory of friendship, and the unveiling of commemorative stamps marking the birth centenary of Bangladesh’s Father of the Nation Bangabandhu Sheikh Mujibur Rahman.