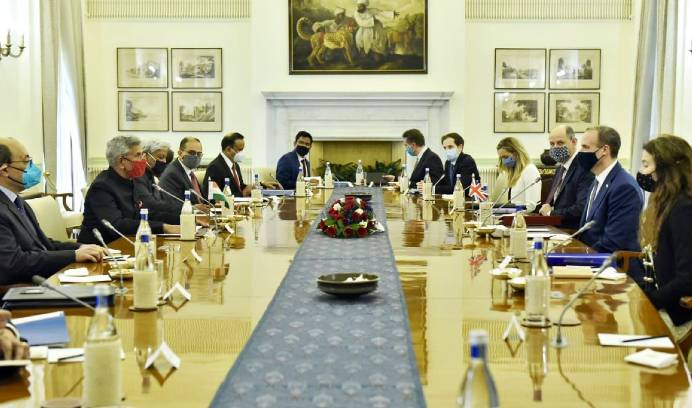 Briefing the media about the issues discussed between the two sides at the press conference, EAM S Jaishankar said, “A lot of our time today was spent on how to give policy directions to broaden cooperation and encourage more activities and collaborations. We focused on five broad themes which were connecting people, trade and prosperity, defence and security, climate and health.”

It is important that India and the UK strengthen their collaboration to hasten the post-COVID economic recovery, he said. This has many facets including promoting greater trade and investment, fostering innovation and facilitating the flow of talent, the EAM said during the press conference.

India and the UK are focusing on trade and investment as an important factor to enhance relationships in the post-COVID era with both nations already having huge investments in each other’s nations.

UK Foreign Secretary Dominic Raab said that both countries are now looking forward to further enhancing this relationship. “First of all we want to deepen our economic partnership,” he said.

At the press conference, Raab said, “Now we want to take that to another level working towards agreeing an enhanced trade partnership next year which itself would be a stepping stone for the future free trade agreement.”

The UK Foreign Secretary said bilateral trade between the two nations grew at a ‘vibrant’ 11 per cent in the year before the pandemic hit. “Our investment relations support half a million jobs in each other’s economies,” he said.

The two sides recognised defence partnership as one of the important factors to encourage the partnerships.

Dr S Jaishankar said, “Challenges posed by terrorism and radicalism were a shared concern. As India enters the UN Security council next month, we look forward to working together with the UK on the range of global issues.”

Similarly, Dominic Raab said that the nations are committed to building a stronger defence and security partnership.

“It will help us tackle shared issues of concern whether it’s terrorism, maritime security including things like piracy in western Indian ocean. It will also help us to respond to new challenges, the emerging challenges like space and cyber security,” Raab said.

“Prime Minister Modi has been very clear that it is a real priority for India. We recognise India’s global leadership in this area through the international solar alliance and the coalition for disaster resilient infrastructure.” Raab said.

Earlier UK Prime Minister Boris Johnson has hailed the incredible things being done by India in the solar energy sector stating that the emergency facing the world from climate change was far more destructive than even the coronavirus pandemic.

“We're going ahead with a massive solar program, even though we can't hope to emulate the incredible things being done by India, Australia, or Morocco for instance,” he had said.

Both sides also acknowledged the importance to strengthen their collaboration in order to combat the challenges of COVID-19. British pharmaceutical giant AstraZeneca is developing Oxford Vaccine or Covishield with Pune-based Serum Institute of India. SII plans to produce over a billion doses of the oxford vaccine by the end of next year.

Apart from that, discussions were also held on enhancing the student exchanges in order to improve the academic research scenario in the international setting.

“In these areas and many others, our partnership can be a powerful force for good in the region and in the world at large and that is why a closer relationship between India and the wider Indo-Pacific region is really one of the very highest foreign policy priorities for the UK government,” Raab said.