India, UK agree to upgrade their partnership to next level 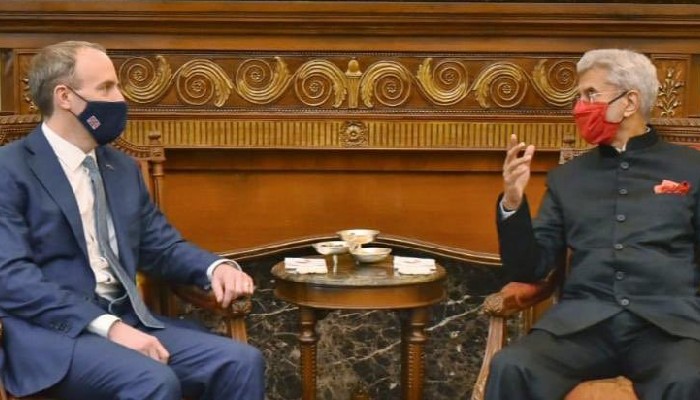 India and the UK on Tuesday agreed to prioritize finalization of an ambitious, 360 degree roadmap for upgrading India-UK partnership to the next level.

This decision was taken during bilateral talks between External Affairs Minister S Jaishankar and the visiting UK Foreign Secretary at Hyderabad House.

Bilateral trade with the UK has witnessed a steady rise in the last decade reaching US $15.48 billion in 2019-20.

To tap the full potential of bilateral trade and economic relations, both sides recognised the importance of fast tracking the discussions on a trade deal as well as concluding a comprehensive migration and mobility partnership agreement that can facilitate swifter movement of students and professionals in both directions.

S Jaishankar and Dominic Raab also held discussions on a number of regional and global issues of mutual interest reiterating their shared commitment to a multi-polar world and faith in multilateralism.

They explored ways to strengthen cooperation in the Indo-Pacific, on countering terrorism and radical extremism and addressing emerging challenges in the cyber, maritime and space domains.

In the context of UK leaving the EU and the big geopolitical changes in a Covid-impacted world, both Ministers recognised the immense opportunities for greater collaboration in diverse sectors such as trade and investments, defence and security, health, education, research and innovation, energy and climate change.

UK Foreign Secretary Raab will be meeting the Minister of Environment, Forests and Climate Change, Prakash Javadekar and Minister of Education, Ramesh Pokhriyal in Delhi.

In the second leg of his tour, he will be visiting Bengaluru where he will meet the Chief Minister of Karnataka on December 17.