Farmers are being misled about agricultural reforms: PM Modi 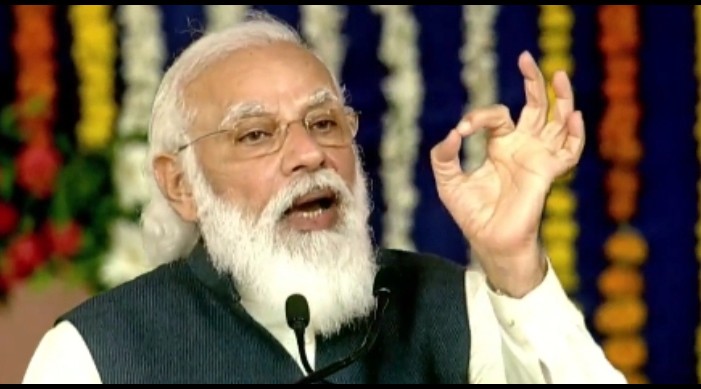 The government is committed to farmers' welfare and will keep addressing their concerns, Prime Minister Narendra Modi said

Farmers are being misled about the agriculture reforms, Prime Minister Narendra Modi said on Tuesday. The agriculture reforms that have taken place is exactly what farmer bodies and even opposition parties have been asking over the years, he pointed out while speaking during an event in Gujarat.

He reiterated that the Government of India is always committed to farmers' welfare and it will keep assuring the farmers, addressing their concerns, according to an official statement issued by the Prime Minister's Office (PMO).

The remarks are significant as they come amid protests by several farmers' unions demanding a rollback of the three farm laws that were enacted in September this year. Senior members of the Union Cabinet, including Agriculture Minister Narendra Tomar and Commerce Minister Piyush Goyal, have held multiple rounds of talks with farmers' representative to find an amicable solution.

Unveiling various developmental projects in Gujarat's Kutch region, PM Modi said that one has to keep up with the changing times and embrace global best practices.

He said the agriculture, dairy and fisheries sectors have prospered in Gujarat over the last two decades due to minimum interference from the Government. What Gujarat did was to empower farmers and cooperatives, the statement quoted PM Modi as saying.

The Prime Minister lauded the farmers in Kutch, who are now exporting fruits abroad, adding that this indicated the innovative zeal of the farmers. He noted how the region had taken a big leap in both new age technology and new age economy.

The development projects for which PM Modi laid foundation stones included the Renewable Energy Park in Kharera, Desalination plant in Mandvi and the New Automatic plant at Sarhad Dehri in Anjar. The benefit of these projects would accrue to the tribals, farmers, cattle ranchers and common people of the region, which is today one of the fastest growing regions of the country with connectivity getting better each day.

Referring to Kutch's four-fold development post the massive earthquake, Prime Minister Modi called on researchers and universities to do a case-study on it.

According to the official statement, the Prime Minister recalled the time when the people of Gujarat had a ‘simple’ demand - to get electricity during dinner time - and noted how things had changed so much in the state.

He lauded the Gujarat Government for introducing many farmer friendly schemes in the last 20 years. He also said Gujarat was a pioneer in its work on strengthening solar energy capacities.

The Prime Minister remarked that energy security and water security were vital in the 21st century. The early teams were mocked when they spoke of getting Narmada waters to Kutch to solve the region's water scarcity. Now, Narmada waters had reached Kutch and it was progressing, he pointed out.