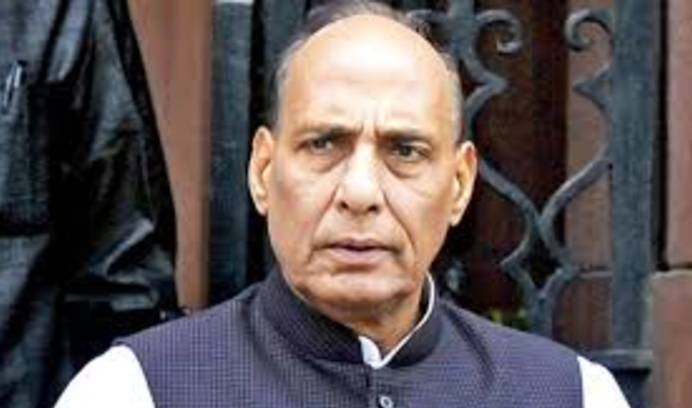 Addressing the annual convention of the Federation of Indian Chambers of Commerce and Industry, Defence Minister Rajnath Singh on Monday said India has stood up to China’s "unprovoked aggression"on the Line of Actual Control and forced Chinese PLA troops to go back.

“As you are aware, there is a big build-up of armed forces at the LAC in Ladakh. In these testing times, our forces have shown exemplary courage and remarkable fortitude. They fought the PLA with utmost bravery and forced them to go back,” the Defence Minister said while addressing the FICCI through video conferencing.

He said “coming generations will be proud of what soldiers of the Indian Army have managed to achieve this year.”

The Defence Minister said India can fight anyone and capable of taking any challenge.

“There comes a point in a nation’s history, every now and then, when it needs to stand up for itself, tell that India can fight anyone, that it’s capable of taking any challenge, just to survive,” he said.

With regard to comparative military strengths of the two countries, he contended there was no scope of ambiguity that India is far ahead of China in leading the world with ideas and soft power.

“Whenever there is a situation at the LAC, the most obvious outcome is a comparison between India and China’s military strength. There can be a serious debate on who owns more military might but when it comes to soft power there is no scope of ambiguity,” Rajnath Singh said.

He called on industry to forge partnerships to provide the armed forces with the right technology and equipment for defending the country and also for pushing up export of military hardware.

Referring to troops’ positioning “in the forefront fighting icy winds to guard our borders”, the Defence Minister asked if the industry could stand shoulder-to-shoulder with the armed forces by using the country’s economic strength to its advantage and forging the right partnerships to provide the right technology and military products to the three services.

“We have opened doors to the private sector, incentivized domestic production, are creating defence corridors and doing a lot more. We are also willing to engage in meaningful joint ventures and partnerships with other countries,” he said, adding the industry should produce defence hardware in India for the world.

Rajnath Singh, who is known for calling spade a spade, said, “The unprovoked aggression on our Himalayan frontiers is a reminder of how the world is changing, how existing agreements are being challenged, how power is being asserted not just in the Himalayas but across the Indo-Pacific, and how uncertain the future of the region and world could be in this backdrop.”

With regard to Buddhism and its influence on China, he said this religion had a “monumental influence over China, to an extent that before the 1949 revolution, almost 80 percent of China’s population followed Buddhism”.

The Defence Minister also quoted a Chinese scholar who had said that “India has culturally dominated and controlled China for more than 2,000 years without sending a single soldier across the border.”

Referring to the issue of cross-border terrorism, he said the world is only now acknowledging the issue though India grappled with it alone for years.

“We have been victims of cross-border terrorism, yet have fought the scourge alone even when there was no one to support us but later, they understood we were right about Pakistan being the fountainhead of terrorism,” the Defence Minister said.