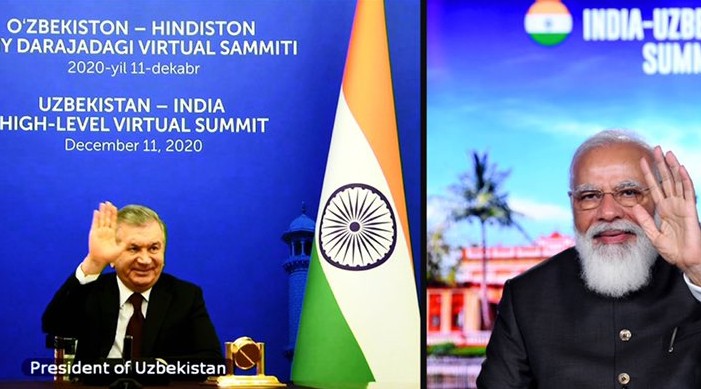 India and Uzbekistan on Friday strongly condemned terrorism in all its forms and manifestations and reaffirmed their determination to combat the menace by destroying terrorist safe-havens, networks, infrastructure and funding channels.

While issuing a joint statement after a virtual summit between Prime Minister Narendra Modi and Uzbekistan President Shavkat Mirziyoyev, the two countries also underlined the need for every country to ensure that its territory is not used to launch terrorist attacks against other countries.

The two countries also agreed to further intensify cooperation under the bilateral Intergovernmental Agreement concluded by both sides in October 2018 on mutual cooperation in combating illicit trafficking in narcotic drugs, psychotropic substances and precursors as well as Interagency Agreement signed in November 2019 on cooperation in the field of combating transnational organized crime and international terrorism.

The leaders discussed the situation in Afghanistan and noted that establishment of peace and stability in that country is of great importance to the security and stability of the entire region.

They called for the settlement of the Afghan conflict on the principle of Afghan-led, Afghan-owned and Afghan-controlled peace process. India and Uzbekistan expressed their unanimity in their support for a united, sovereign and democratic Islamic Republic of Afghanistan.

The two sides agreed that it would be vitally important to preserve the socio-economic development and political gains achieved by Afghanistan in the last 19 years, including the rights of minorities, women and children.

With regard to the United Nations, they reaffirmed that the global body must play a central role in maintaining global peace and security.

The Indian side thanked the Uzbek side for its support to Indian candidature for the UNSC and congratulated the Uzbek side on its successful election to the United Nations Human Rights Council for the term 2021-23.

The two sides lauded their close cooperation in the Shanghai Cooperation Organization. Uzbekistan congratulated India on its successful holding of the Meeting of the Council of the Heads of Government of SCO on November 30, 2020 which was the first-ever HOG-level event hosted by India since its joining the SCO.

India thanked Uzbekistan for its support in the successful holding of the 2nd India-Central Asia Dialogue at the level of Foreign Ministers with the participation of Afghanistan.

The two countries drew satisfaction from the successful institutionalization of the India-Central Asia Dialogue mechanism, the first meeting of which was hosted by Uzbekistan in Samarkand in January 2019 as a joint India-Uzbekistan initiative.