India, Sweden should work together to build a more resilient and strong partnership: Piyush Goyal 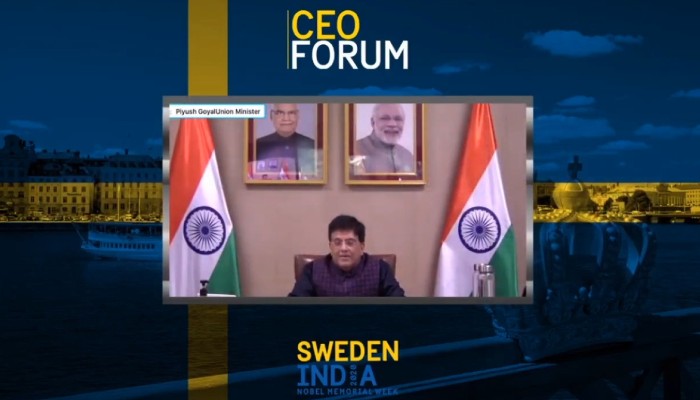 India’s renewed focus on technology will help in giving a new dimension to the India-Sweden partnership, Goyal said

India and Sweden should work together to build a more resilient and strong partnership, said Union Minister of Commerce and Industry Piyush Goyal, adding that taking forward this friendship will make Sweden an important part of India’s growing economy.

Speaking at the CEO Forum of India-Sweden strategic business partnership, he said, “We would like Sweden to be a part of our efforts to expand the Indian economy, to reach a higher level of prosperity & design an India suitable for global engagement in the modern 21st-century world. I am sure that the CEO forum & Sweden-India strategic business partnership will help us expand this friendship at every level & make Sweden an important part of India's growing economy.”

The Minister further said that India’s renewed focus on technology will help in giving a new dimension to the India-Sweden partnership.

“We have a very large & growing middle class, aspiring for a better quality of life. I am sure Swedish companies would love to work in India & explore better opportunities. We believe our renewed focus on technology will help us re-align India's priorities and Sweden will have an important role to play, being our natural partner for innovation & growth,” he said.

Talking about Aatmanirbhar Bharat, Goyal said Sweden is as much a partner and a part of Aatmanirbhar Bharat as any other democratic, like-minded country, which believes in rules of fair trade & reciprocal access to Indian businesses in their country.

“Swedish companies in India have a very big role to play in our hope & desire to expand our engagement with the rest of the world. Under Aatmanirbhar Bharat, Sweden & India complement each other. Sweden is the world's innovator and is at the forefront of developing cutting edge technologies in a variety of fields. India can benefit immensely with this partnership,” he said.

He further said that India looks forward to Sweden and the European Union opening its doors a little wider, removing some of the non-tariff barriers or standards, so that there is reciprocity in our trade with Sweden and Europe and expansion of business on both sides.

The Minister said that there are several investment opportunities for both sides, and India looks forward to expanding business with Sweden.

“We have a wonderful opportunity to expand the role of Swedish companies in India and simultaneously encourage Indian companies also to contribute to the development & growth of Sweden and for the better future for the people of Sweden. I continue to look forward to the support of Sweden in India's own efforts to expand our economy, to provide jobs & work opportunities to millions of boys & girls coming out with special skills which can help Swedish companies expand their businesses,” he said.