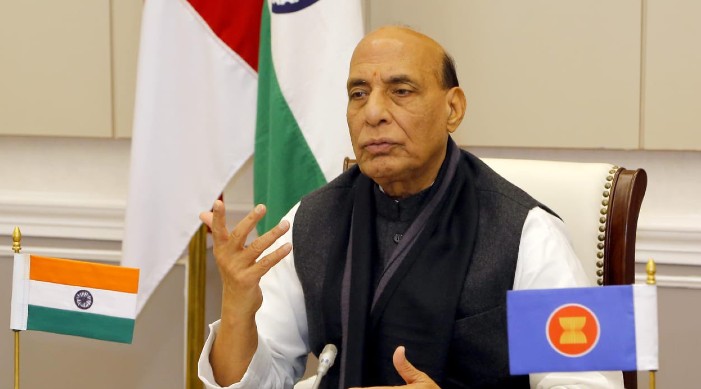 Reiterating India’s stance on the region, Defence Minister Rajnath Singh on Thursday said that the country supports an ‘open and inclusive’ order in Indo-Pacific based upon respect for sovereignty and territorial integrity of nations, peaceful resolutions of disputes through dialogue and adherence to international rules and laws.

Speaking virtually at the 14th ASEAN Defence Ministers’ Meeting Plus, Singh also reiterated India’s support to freedom of navigation and overflight for all in International waters following the UN Convention on the Law of the Sea (UNCLOS). He underlined the importance of mutual trust and confidence based on restraint in activities and actions that may further complicate the situation in the region.

He recalled the launch of the Indo-Pacific Oceans Initiative (IPOI) by Prime Minister Narendra Modi in last year’s East Asia Summit and stated that IPOI is an open global initiative that draws on existing regional cooperation architecture and mechanism. He noted the commonality between India’s IPOI and ASEAN Outlook on Indo-Pacific, both being opportunities for cooperation.

The Defence Minister also stated that terrorism remains a major scourge for the region and world. He reiterated that the structures that support and sustain terrorism continue to exist, including in India’s neighborhood. He called for stronger commitment and the need to strengthen the International mechanism to fight terrorism, jointly and vigorously.

ADMM Plus is an annual meeting of Defence Ministers of 10 ASEAN Countries and eight partner countries. This year marks the 10th year of inception of the ADMM Plus forum.


Delighted to address the ASEAN Defence Ministers’ Meeting- Plus on the 10th anniversary of its foundation.

We appreciate the central role of ASEAN-led forums, including ADMM Plus in promoting dialogue and engagement towards a pluralistic, cooperative security order in Asia. pic.twitter.com/9t58uuGogy


During his address, Singh also underlined the key role of the ASEAN-centric forum in promoting dialogue and engagement towards a pluralistic, cooperative security order in Asia. He highlighted the collective achievements of ADMM Plus in the past decade in advancing multilateral cooperation through strategic dialogue and practical security engagements.

He complimented the achievements of the seven Expert Working Groups in sharing best practices in key domains including Maritime Security, Humanitarian Assistance and Disaster Relief, Counter-terrorism, and Peace Keeping Operations.