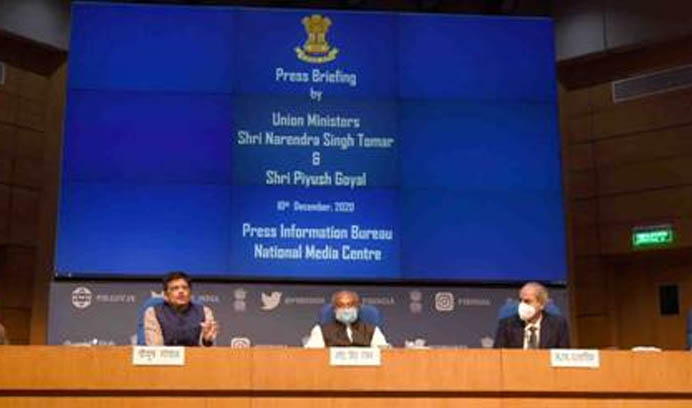 The government on Thursday appealed to the farmers' union leaders to continue their dialogue so that an amicable solution can be found to address their demands. At the same time, it reiterated that the central government was well within its Constitutional Rights while making laws on Agricultural Trade.

Several rounds of talks between the farmers' leaders and the centre have failed to yield a solution as thousands of farmers continue to protest at Delhi's borders.

Outlining various suggestions that have been given to farmers in a proposal to address their concerns about the Farm Acts, Union Minister for Agriculture and Farmers Welfare Narendra Tomar and Union Minister for Consumer Affairs, Food and Public Distribution Piyush Goyal said these reforms will provide farmers market freedom, encourage entrepreneurship, access to technology and they will transform agriculture.

According to the government, the Farmers Produce Trade and Commerce (Promotion and Facilitation) Act 2020 and Farmers (Empowerment and Protection) Agreement on Price Assurance and Farm Services Act 2020 and the Essential Commodities Amendment Act 2020 are the biggest agricultural reforms in the country so far.

Trying to assuage the apprehensions expressed by the farmers, the two Union Ministers said the government was willing to give an assurance on MSP and procurement and ensure a level playing field in transactions inside and outside the existing Agricultural Produce Marketing Committee (APMC) mandis.

They pointed out that the Modi Government had announced MSP hikes based on the recommendations of the Swaminathan Commission and on the formula that farmers must get at least 1.5 times the cost of production. At the same time, the Government has also ensured greater procurement and greater payment to farmers.

In the case of disputes, the government has said the farmers can approach civil courts besides the SDM courts. The government is willing to address concerns regarding the penalty for stubble burning and in the proposed electricity amendment Bill.

Farmers' land will be protected under the new farm Acts, the Union Ministers pointed out.

These Acts were "reforms undertaken after many rounds of consultations with stakeholders," the government has emphasized, adding that when the Centre makes a law, it is for the whole country.

The new laws give the farmers freedom to sell anywhere and strengthen farmers with a protective legal framework when dealing with private companies. Union Agriculture Minister Tomar gave the example of a farmer from Maharashtra who got immediate payment from the trader after the grievance was successfully addressed under the new laws.

Some of the other important points made during the press briefing were:

* The Budgetary allocations for agriculture have seen a significant rise from 2014-2020.

* An allocation of 75,000 crore has been made for just the PM Kisan initiative, under which farmers get Rs 6,000 per year of direct income support.

* Rs 1 Lakh crore Agri Infrastructure Fund has been set up for the development of farm gate infrastructure.

* Farmers have been provided pension support under the PM Kisan Maan Dhan Yojna.