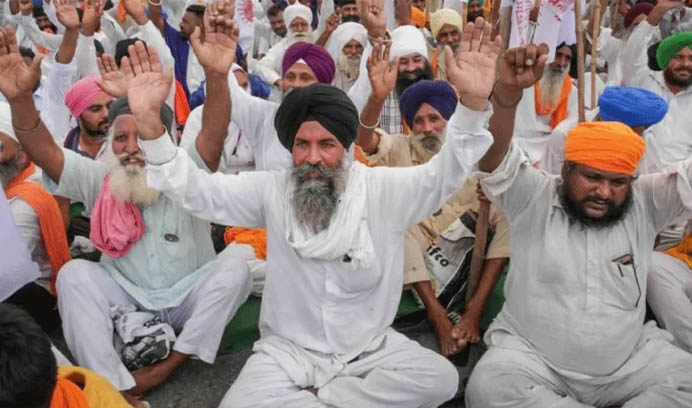 Protesting farmers at an entry point to New Delhi

Although farmers belonging to Punjab and Haryana are protesting against three farm laws the parliament enacted recently, but overall, they will not only provide farmers a freedom to trade across states their produce, they will also empower them to turn themselves into traders of their own yields.

In substantial terms, the farm laws like Farmers Produce Trade and Commerce (Promotion and Facilitation) and the Farmers (Empowerment and Protection) Agreement on Price Assurance and Farm Services are visionary. As they promise a sustainable and profitable future for millions of farmers in the country.

Several farm experts over the years maintained that change in the farming sector was the need of the hour. There was not any law that could give freedom to farmers in taking decisions about their produce.

Rather their hands were tied in the sale and purchase of agricultural goods. Farmers were restricted from selling their agricultural produce outside the notified Agricultural Produce Market Committee (APMC) yards.

But now these farm laws promise to change the course of farmers’ life. They can engage in the commerce of their agricultural goods outside the physical premises of markets notified under State Agricultural Produce Marketing legislations.

Remember, Indian agriculture is characterized by fragmentation due to small holding sizes. It has certain weaknesses such as weather dependence, production uncertainties and market unpredictability. This makes agriculture risky and inefficient in respect of both input and output management.

In this backdrop, these farm laws are exceptionally revolutionary in nature as they will now rid farmers of unnecessary hurdles they face in handling farm related issues.

Amid this, the government has already made it clear that these farm laws will not impact the procurement at Minimum Support Price nor ‘Mandis’ set up under State laws will be closed down.

In fact, the government bound by its commitment to double the income of farmers, has offered the farming community an opportunity to cheer about their life.

The laws also propose an electronic trading in transaction platform for ensuring a seamless trade electronically. This is the reason a majority of farmers associations have welcomed the decision of the government in getting the farm laws passed by the Parliament.

Federation of All India Farmers Associations (FAIFA) has termed the passing of laws as a timely move of the government in ensuring that farmers receive fair price of their produce and they remain in control of their incomes.

“These timely crucial steps taken by the government will serve as cornerstones for envisioning a fair market for farmers that lets them receive their fair price by letting them be in control of their incomes with freedom to trade,” FAIFA president B V Jaware Gowda said in a statement.

What is, however, significant is that the new set of farm laws will help accelerate agricultural growth through private sector investment in building agricultural infrastructure and supply chains for the country’s farm produce in national and global markets. They will help generate employment opportunities and the rural economy will get a boost, which will in turn help in strengthening the country’s economy.

Another noteworthy fact connected with these farm laws is that they will pave the way for creating One India, One Agriculture Market and will lay the foundation for golden harvests for the country's millions of hard working farmers.