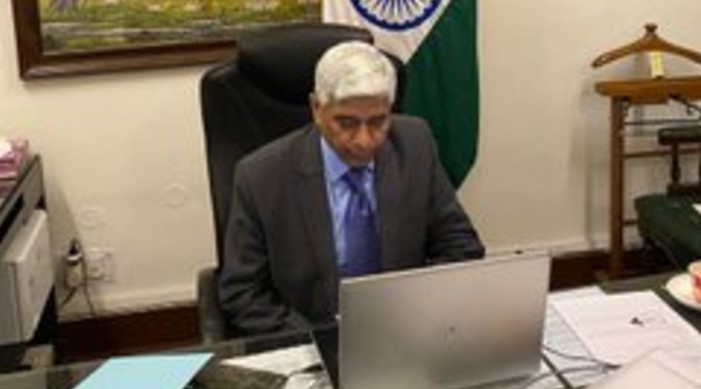 Women peacekeepers can help in the protection of the most vulnerable

India is committed to increasing the number of women peacekeepers to the United Nations, said the Ministry of External Affairs Secretary (West) Vikas Swarup.

Speaking on the topic "Future of Women in Peacekeeping" at the International Conference on Women Peace and Security, Swarup said, “As we all know from experience, women suffer the most in any conflict situation. Obviously, more women in peacekeeping means more effective peacekeeping.”

Swarup further said that women peacekeepers have greater access to communities, and they can help in the protection of the most vulnerable, and inspire other women to play a meaningful part in peace and political processes.

Further, the MEA Secretary, quoting some reports, said that the peace agreements are 35 percent more likely to last at least 15 years when women are at the table.

“Women peacekeepers are essential enablers to build trust and confidence with local communities and help improve access and support for local women. Women are also suited better to address the disproportionately negative effect that conflict has on the livelihood of women and bring new perspectives and solutions to the table by effectively addressing the needs of women and children in conflict and post-conflict settings,” he said.

The MEA Secretary spoke on India's contribution to the UN engagement with countries facing or recovering from prolonged conflicts through the deployment of uniformed women contingent, recalling instances such as in 1960 when women of Indian Armed Forces Medical Services going to the UN peacekeeping mission in the Republic of Congo to assist with the setting up of a 400-bed hospital and deploying the first-ever all-female Formed Police Unit (FPU) in 2007, which served in Liberia for a decade.

"Women peacekeepers obviously serve as powerful mentors and role models for women and girls in post-conflict settings in the host community, being examples for them to advocate for their own rights and pursue non-traditional careers," he said.

Reiterating India’s support on issues focusing on women empowerment and gender mainstreaming at various UN bodies, the MEA Secretary said, “While we fully welcome the initiatives by the UN Secretariat in driving the formulation of policy frameworks to increase the number of women peacekeepers, we notice that to accommodate countries who cannot fulfill all-women unit commitments, the policy frameworks have been diluted to prefer mixed units over full women units. This calls for an approach towards review and greater introspection.”

He further said that India is committed to increasing the number of women peacekeepers and to meeting the targets in this regard within the specified timelines.

“In order to fulfill its commitments, India has already deployed a Female Engagement Team at the Democratic Republic of the Congo as part of the Rapidly Deployable Battalion in MONUSCO. We have also pledged a Women Formed Police Unit (FPU) under the Peacekeeping Readiness Capability System,” Swarup said.

“India was the first country to contribute to the Secretary-General's Trust Fund for Victims of Sexual Exploitation and Abuse and also signed the voluntary compact on SEA with the Secretary-General in 2017. The Indian Prime Minister has joined the "Circle of Leadership” on the prevention of and response to sexual exploitation and abuse in United Nations operations,” he said.

In his concluding remarks, the MEA Secretary said that India stands ready to engage with its partners to work towards ensuring the meaningful participation of women and mainstreaming of women, peace, and security considerations for building inclusive, peaceful, and resilient societies.