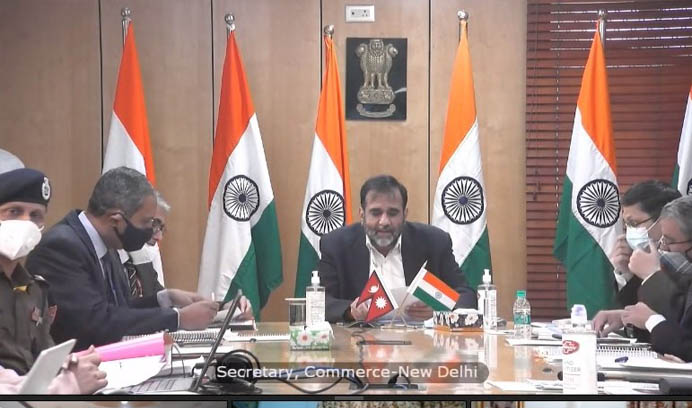 Taking ahead its ‘Neighbourhood First’ Policy, India participated in the India-Nepal Inter Governmental Committee on Trade and Transit today with Commerce Secretaries of both nations discussing a range of issues mainly on trade and investment between the two nations.

The meeting between the two Commerce Secretaries on the Inter-Governmental Committee (IGC) on Trade, Transit and Cooperation to Control Unauthorized Trade discussed development of trade infrastructure. The two sides also discussed the investment promotions including new proposal of development of cross border economic zones and holding meeting of Joint Business Forum.

The meeting was held between the Indian Commerce Secretary Anup Wadhawan, and his Nepalese counterpart Dr Baikuntha Aryal via video conferencing. The Commerce Secretary of India was accompanied by the Ambassador of India to Nepal Vinay Mohan Kwatra and a 15 member delegation drawn from various Ministries and the Indian Embassy in Kathmandu.

The Indian Embassy in Nepal said both sides reviewed the progress made on a wide ranging bilateral agenda including development of trade infrastructure as well as investment promotions including new proposal of development of cross-border economic zones.

Both Commerce Secretaries noted with appreciation that despite the Covid-19 pandemic, there was smooth and unimpeded trade and commercial cargo movement by trucks across the land border with support and facilitation of both governments.

According to an official statement by the Ministry of External Affairs, the meeting reviewed progress made on several notable agenda items in the sphere of trade and commerce.

Discussions were held on the Treaty of Transit and the Treaty of Trade, amendments to the Rail Services Agreements, measures taken for investment promotion, constitution of Joint Business Forum, harmonization of standards as well as synchronized development of trade infrastructure on the two sides.

The two sides also discussed in detail various Government-level initiatives that need to be taken in future for further enhancing trade and commercial linkages, the ministry said in the statement.