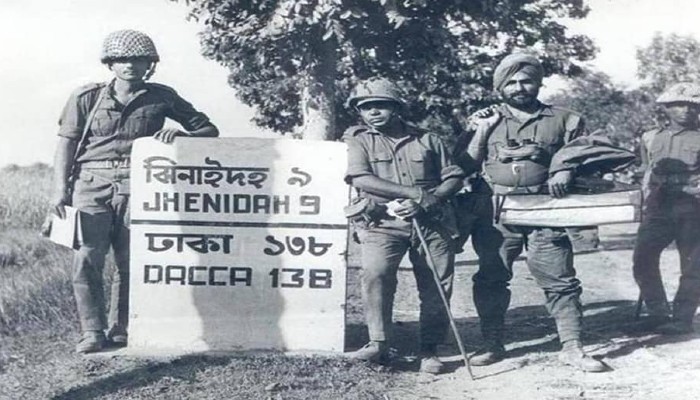 File photo of Indian Army personnel in what was then East Pakistan. (Source: Twitter @easterncomd)

This year also happens to be the centenary year of the father of Bangladesh, Bangabandhu Sheikh Mujibar Rahaman

History was scripted 50 years ago on this day, when Pakistan was defeated by the Indian Army and the Mukti Bahini. Bangladesh came into being after Pakistan was forced to cede control of what was then East Pakistan.

This year also happens to be the centenary year of the father of Bangladesh, Bangabandhu Sheikh Mujibar Rahaman.

The Eastern Command hosted a curtain-raiser for Vijay Diwas at their headquarters in Fort William, Kolkata.

Major General V Sreehari, SC, MGGS, Eastern Command, noted that the 1971 campaign was a very good example of people's aspirations being ably supported by decisive military action that led to the birth of a new nation.

He said Vijay Diwas was a historical event for the Eastern Command in particular.

Bangladesh Deputy High Commissioner Toufique Hasan, who attended the curtain-raiser, thanked the Indian government for its support during Bangladesh’s war for independence from Pakistan.

Media reports quoted him saying, “50 years back, we got our long-cherished independence after a nine-month bloody war, and we got all of our support from the Government of India, their moral and diplomatic support, their material support. They also gave us shelter, as around 1 crore people came here from Bangladesh during that time.”

“I really feel proud that as I am serving here in the Kolkata mission as the Bangladesh High Commissioner, which is the first Bangladesh mission abroad,” he added while addressing the ceremony, the reports said.

After nine-months of struggle and torture at the hands of Pakistani forces, Mukti Joddhas of the Mukti Bahini raged a war against them in 1971. The Indian defence forces supported Bangladesh’s freedom struggle. On December 16, 1971, around 93,000 Pakistani troops surrendered and a new country by the name of Bangladesh was formed.