Australia an ‘important partner of India in the post-COVID economic balancing’: MEA 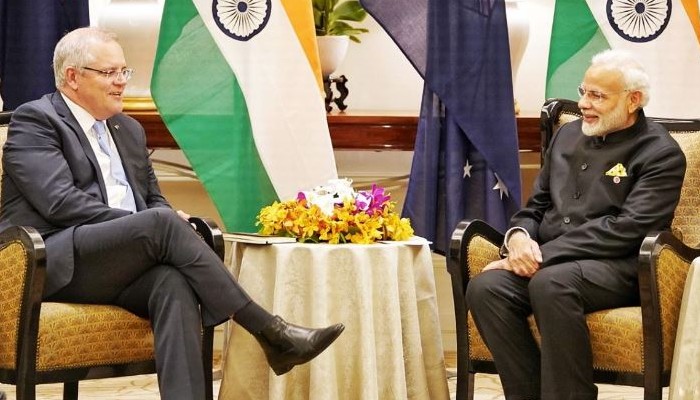 Australia is an important partner of India in the post-COVID economic balancing as well as in the Indo-Pacific Ocean Initiative, the Ministry of External Affairs has said, highlighting the cordial relationship between the two nations.

While replying to a question during the weekly media briefing on Thursday, MEA official spokesperson Anurag Srivastava said, “Our two countries enjoy strong bilateral relationships and we are both democratic nations with shared values based on commitments to a rule based global order.”

India and Australia share a great bond when it comes to the bilateral relations between the two. One of the sectors the countries are focusing on includes maritime security.

The nations are ensuring a rule-based Indo-Pacific in the form of several agreements signed between the two as well as various maritime exercises between the two. The Australian Navy also participated in last month’s Malabar Joint Naval Exercise in which India, Japan and the US had participated.

Referring to the virtual summit held between Prime Minister Narendra Modi and Australian PM Scott Morrison, he said, “A virtual summit was recently held between the two prime ministers on June 4 and at this virtual summit, it was decided to elevate our bilateral relationship to a comprehensive strategic partnership.”

In fact, during the summit, both nations added another milestone by signing the Mutual Logistics Support Agreement (MLSA) which enabled them for a reciprocal access to military bases for logistics support.

The agreement also enables both nations to use bases of each other for repair and replenishment of supplies. The deal was signed during a virtual summit between Prime Minister Modi and Australian Prime Minister Morrison.

Both nations also discussed maritime cooperation between the two Indo-Pacific partners. The leaders decided on a Shared Vision for Maritime Cooperation in the Indo-Pacific region to harness opportunities and meet challenges together as Comprehensive Strategic Partners.

To make the rule-based Indo-Pacific, both nations acknowledge China as a big challenge, especially at a time when even Australia is facing troubles from China which worsened this week.

China’s foreign ministry spokesperson Zhao Lijian, earlier this week, posted a digitally altered image of an Australian soldier holding a knife to the throat of an Afghan child. Under the image, it wrote, “Don’t be afraid, we are coming to bring you peace!”

The caption read, “Shocked by murder of Afghan civilians & prisoners by Australian soldiers. We strongly condemn such acts, & call for holding them accountable.”

This angered Australia with the Australian PM asking China to apologise which the latter blatantly refused to do.

When asked if India discussed the issue with Australia, Srivastava said, “Given the depth and importance of our bilateral relations, naturally, we exchange views on regional and global development as well as on current issues of concern.”