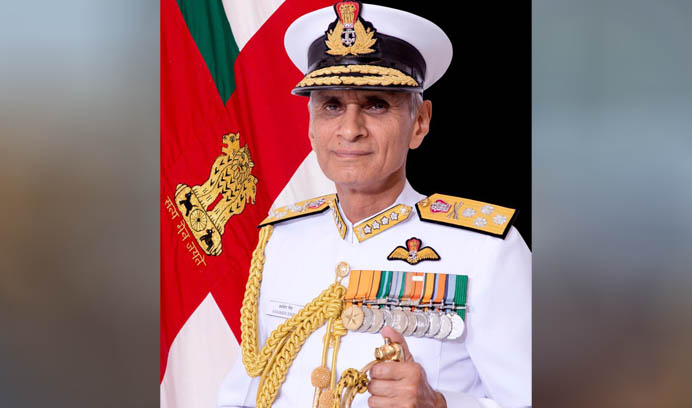 The Indian Navy is prepared to handle the dual challenges posed by China's attempts to change the status quo on the northern borders and the COVID-19 pandemic, Indian Navy Chief Admiral Karambir Singh said today.

Pointing out that these challenges had "significantly increased" the complexities of the prevailing security situation, Admiral Singh said the Indian Navy was working in close coordination with the Indian Army and the Indian Air Force. The navy had deployed its P-8I surveillance aircraft and Heron drones at various locations at their request, he said while addressing a press conference on the eve of Navy Day.

In a reference to the standoff between China and India at the Line of Actual Control (LAC), he said, “Whatever we are doing is in close coordination with the Army and the Indian Air Force”.

He also pointed out that there is a standard operating procedure (SOP) in place to tackle any situation in case of an infringement by Chinese vessels of India's maritime boundaries. “Chinese have three ships in Gulf of Aden and doing anti-piracy patrol since 2008. As of now, these are the only warships that are present in the Indian Ocean region,” Chief Admiral Singh said.

India and China are locked in a bitter row at the LAC since May which worsened after 20 Indian soldiers were killed in action during a violent faceoff with the Chinese Army in Eastern Ladakh's Galwan Valley on June 15. China too suffered a large number of casualties though it never disclosed a figure.

The Navy Chief said that India is well equipped to tackle any untoward incident and is procuring new weapons. He said that in order to carry out effective surveillance, India has taken two MQ-9B Sea Guardian drones on lease from the US. These, he said, are helping to fulfil India’s gap in terms of surveillance.

To add more to self-sustainability, 41 out of the 43 warships and submarines which also include indigenous Aircraft Carrier will be built indigenously in the country for the Indian Navy, he added. "Air power at sea is required here and now," he said.

Putting speculations regarding the underwater preparedness of the Indian Navy to rest, Admiral Singh said that the Navy is focused on the underwater domain calling it a key focus area.

For which, he said, once the MH-60Rs come in, they will also be able to help out greatly in this domain, he said. “We are also going into the upgrade of some of the helicopters,” he said.

He said that Indian Navy is procuring Smash-2000 rifles as anti-drone equipment to protect against attacking drones. He said that the acquisition of around 30 Predator drones for the three services is likely soon.

The Indian Navy is leaving no stone unturned to showcase its dominance in the Indo-Pacific region. It participated in 13 bilateral and multilateral naval exercises this year. Last month, for the first time in history, all the QUAD grouping members participated in the Malabar Joint Naval Exercise. They include India, Australia, Japan and the United States.

Apart from that, Indian Navy has also held joint naval exercises with Singapore, Sri Lanka, Bangladesh, Thailand and Russia among others, the Navy Chief said.