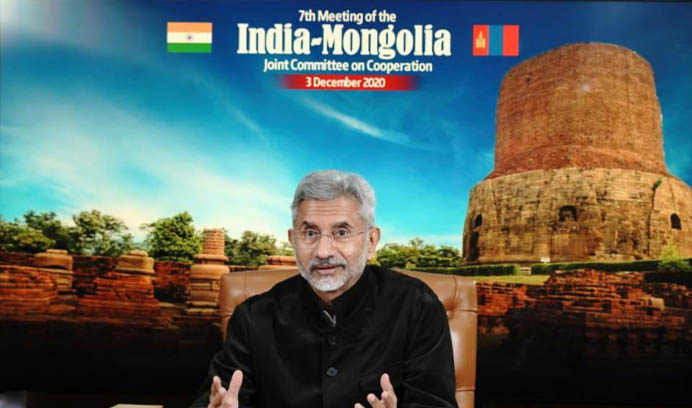 India and Mongolia on Thursday reviewed the progress of the ongoing developmental partnership projects, including the US$1.236 billion Line of Credit Oil Refinery Project and the US$20 million Atal Bihari Vajpayee Centre of Excellence in ICT and Outsourcing.

Reiterating their commitment to close ties between the two countries, the two sides discussed possible cooperation in combating COVID-19, including the procurement of vaccines from India in the future.

According to a press release issued by the Ministry of External Affairs, the two sides had comprehensive discussions on the entire range of issues covering bilateral cooperation.

Jaishankar and Mongolia's Minister and Chief Secretary Oyun-Erdene recalled Prime Minister Narendra Modi's historic state visit in May 2015, during which the partnership between the two countries was raised to the level of Strategic Partnership. The two sides also recalled the state visit of Mongolian President Khaltmaagiin Battulga to India in September 2019.

This year marked the 65th anniversary of establishment of diplomatic relations between India and Mongolia, which have grown deeper and stronger, especially in the last few years.

To mark the occasion, the Mongolian side released a special stamp issued by Mongol Post while Jaishankar virtually handed over 25 volumes of Mongolian Kanjur, the Buddhist canonical text in 108 volumes. It has been printed by the Government of India under the National Mission for Manuscripts.

Honoured to virtually hand over 25 volumes of Mongolian Kanjur - Buddhist canonical text. Thank Prof. Lokesh Chandra & team for their contribution. Have also offered to strengthen our collaboration with Gandan and Pethub monasteries of Mongolia. pic.twitter.com/08DvAAidAn

India welcomed Mongolia's decision to join the International Solar Alliance, an initiative to promote the use of clean energy. The two sides also agreed to establish an AYUSH Information Cell in Ulaanbaatar at an early date.

According to the MEA, the two ministers noted with satisfaction that despite COVID-19 challenges, several special flights had been arranged between the two countries in the last few months. This had allowed citizens of the two sides to return to their respective countries. India also appreciated Mongolia's move to facilitate 'Visa on Arrival' for Indian citizens.

Among the positive features of the bilateral relationship that was discussed was the coordination between the two countries in regional and multilateral forums. The two sides agreed to continue this tradition and also support each other in relevant international forums.