India is steadfast in its support for ‘just Palestinian cause’: TS Tirumurti to UN 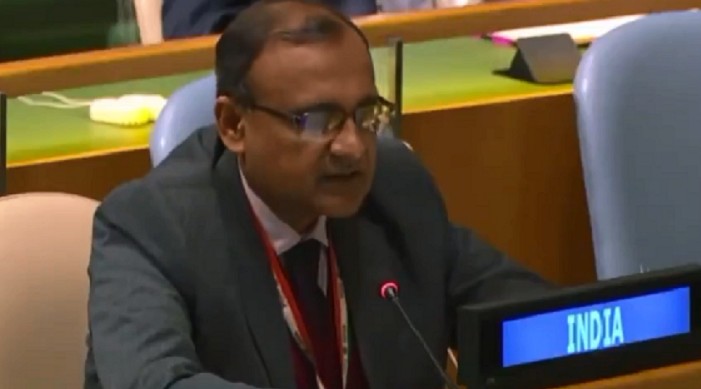 India has been steadfast in its support for the ‘just Palestinian cause,’ India’s Permanent Representative to the United Nations TS Tirumurti said while stating that India is in favour of peaceful negotiations between Israel and Palestine.

Speaking at the 75th Session of the UN General Assembly on the ‘Question of Palestine’ he said, “India has been steadfast in its support for the just Palestinian cause and in our solidarity with Palestinian people, which extends beyond political support.”

According to an ANI report carried by Business World, Tirumurti informed the Assembly that India has always encouraged for peaceful negotiations between Israel and Palestine and cleared his position on the same saying the Palestinian people must not be forgotten.

“India remains fully supportive of a peaceful negotiated settlement of the Israeli-Palestinian conflict achieved through direct negotiations, resulting in the establishment of a Palestinian State living side by side in peace and security with Israel,” he said.

He informed the Assembly that over the years, India has invested in strengthening and realising the human resource capacities in the war-torn country.

“India has invested in strengthening human resource capacities of the Palestinian people through scholarships for Palestinian students pursuing higher education and training of Palestinian professionals in prestigious Indian institutes,” he said. So much so that around 250 Palestinians benefit from such opportunities, he added.

In fact, India has quadrupled its support to the UN Relief Works Agency in recent years, he said, speaking on the topic of India’s humanitarian aid to the United States.

“India had quadrupled its support to United Nations Relief and Works Agency in recent years. We have also made a multi-year pledge of 10 million dollars over the coming two years to contribute to more stable and predictable funding for UNRWA,” India’s Permanent Representative said during the session.

India’s aid to Palestine includes construction of schools, hospitals, technology parks and centres for excellence among others. “We see it as an essential investment to help establish a viable and sovereign Palestinian State,” he said.

As per the report, Palestine and Israel have been fighting over the Gaza Strip for decades. The countries were allotted a large part of Palestine but Arabs, who were there already did not accept the new country, the report said.

Just like the conflict, India’s aid to Palestine is also decades old. India’s support to Palestine was an integral part of the nation's foreign policy. It became the first Non-Arab country to recognize the Palestine Liberation Organization (PLO) as the sole and legitimate representative of the Palestinian people in 1974, the report said.

India was also one of the first countries to recognize the State of Palestine in 1988, the report said. Since then, India has supported Palestine on various international forums including UNESCO, UNGA and others.