'India has always given priority to the CMLV region': MoS Muraleedharan 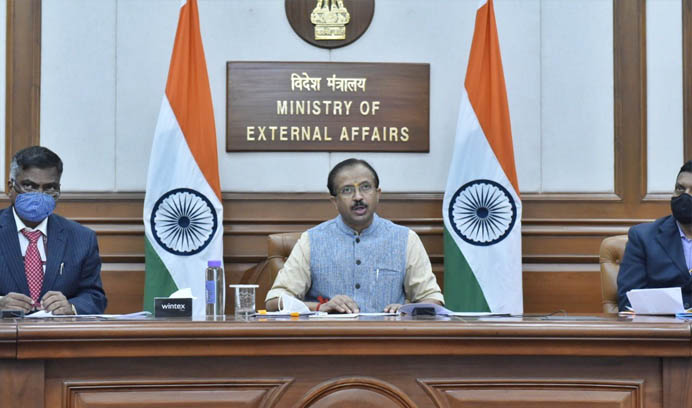 Speaking at the 6th India-CLMV Business Conclave on Thursday, Muraleedharan referred to the $1 million aid to the ASEAN Covid19 Response Fund. India had also provided medicines to Laos and Myanmar, he said.

Union Minister of Commerce and Industry and Railways Piyush Goyal was the chief guest at the inaugural session.

The two-day event has been organised virtually by the Confederation of Indian Industry (CII), in partnership with the Department of Commerce, Ministry of Commerce and Industry, Government of India.

Trade ministers from the CLMV region have been invited to the conclave.

While Muraleedharan addressed the inaugural session, Myanmar Minister of Commerce Than Myint also made his remarks as Guest of Honor.

Muraleedharan said that the Indian government has always prioritized the CLMV region, most recently by announcing $1 million aid to the ASEAN Covid19 Response Fund and providing medicines and medical equipment to Laos and Myanmar.

In terms of capacity building measures, an Indian ITEC course on how to navigate the pandemic was attended by armed forces doctors from the region, he pointed out.

The Indian government has always prioritized the CLMV region, most recently by announcing $1 million aid to the @ASEAN #Covid19 Response Fund and providing medicines and medical equipment to Laos and Myanmar. ~ @VMBJP, @MOS_MEA at #6thIndiaCLMVConclave. @DoC_GoI pic.twitter.com/kI2hpGFUl6

Speaking at the event, Myint said that the trade and investment between India and CLMV is steadily growing. The cooperation can increase further by sharing of best practices and providing new opportunities to business in these uncertain times, he said.

The Minister of Commerce and Industry, Laos, Khemmani Pholsena said that physical connectivity is one of the backbone of competitiveness. Investing in a robust infrastructure, technology, and education will help sustain long term growth in the region.

The Secretary of State, Ministry of Commerce, Cambodia, Chhuon Dara also reiterated his country’s support towards the partnership.

“Efforts must be made to improve logistics and connectivity in priority areas, as well as to reduce technical barriers to trade,” he said.

According to an official statement, the 6th edition of the Conclave creates yet another platform to strengthen India’s cooperation with the CLMV countries.

CII Director General Chandrajit Banerjee said the CLMV region is a key growth centre in Asia, especially when the world is looking to re-risk and create resilient supply chains. India believes in a win-win partnership with the region, he said.

During the session, the report on 'Building Infrastructure in CLMV: Opportunities in India' was also released.

The CLMV countries have surfaced as key growth points for the ASEAN Region, giving this region a wider market outreach resulting in preferential/free trade agreements with larger economies of the World and are considered to be very conducive for setting up manufacturing units, the official statement said.

Apart from the sectoral sessions, there would be a virtual exhibition spread over 15 days with enterprises from India and the CLMV countries showcasing their products and services across sectors like Agriculture (Agri & Food Processing, Farm inputs & Allied Services), Manufacturing, and Light Industry (Automobiles, Textile, and Machine Tools), Power & Clean Energy, Infrastructure, Transport & Logistics, Healthcare & Pharmaceuticals, IT, and Skills & Education, according to the statement.

The two-day event will have sectoral sessions, country focus sessions and will have participation from Government, Industry from India, and CLMV region.