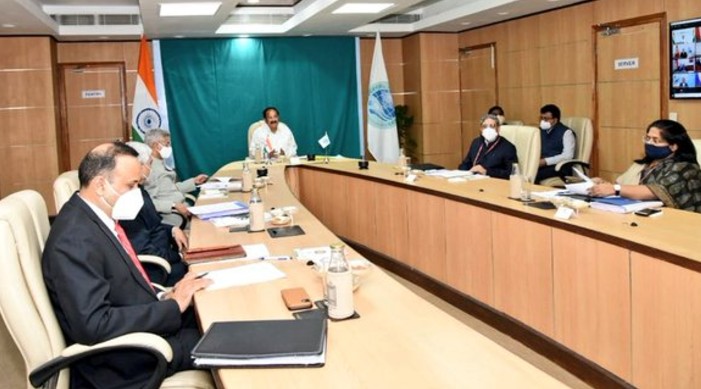 India has over 38,000 recognised startups across 590 districts in the country

Among several other proposals, India, during the virtual meeting of the council of heads of government of the Shanghai Cooperation Organisation (SCO), proposed to annually host the Special Working Group on Startups and Innovation along with the Startup Forum.

In his address during the meet, Vice President M Venkaiah Naidu said that having the 3rd largest startup ecosystem in the world, India has created a robust and dynamic environment for startups and innovators to thrive.

This year, he said, during the Chairmanship, India has proposed to create a Special Working Group on Startups and Innovation.

“During our Chairmanship this year, we have proposed to create a Special Working Group on Startups and Innovation. As you are aware, India has the 3rd largest startup ecosystem in the world and has created a robust and dynamic environment for startups and innovators to thrive,” he said.

The working group will lay the foundation for multilateral cooperation among the SCO Member States to develop and hone their startup ecosystems through knowledge-sharing workshops, training young entrepreneurs, enabling access to investors, and exchanging best practices, the Vice President said.

To enable the same, India offered to host such a forum every year. “India offers to annually host the Special Working Group on Startups and Innovation and also the SCO Startup Forum,” VP Naidu said in his address.

Emphasising upon the importance of the role such forums play in collective development, he said, “India is committed to take our cooperation within SCO to new heights by playing a proactive, positive and constructive role in the organization.”

He also congratulated SCO Trade Ministers for approving the Action Plan for the implementation of the Program of Multilateral Trade and Economic Cooperation for the period 2021-2025.

“I also congratulate SCO Member States for participating in the first ever Consortium of SCO Economic Think Tanks hosted by India. The Delhi Action Plan developed by the Consortium provides an excellent road-map for future economic cooperation,” he said.

Touching upon the importance of the Micro, Small and Medium Enterprises (MSME) sector in the economic growth of all countries, the Vice President said that India, on its part, was ready to share its best practices in this sector.

He said India’s National Chapter in the SCO Business Council Federation of Indian Chambers of Commerce & Industry (FICCI) has proposed to organize an annual SCO MSME Bazaar and to establish a digital SCO MSME Centre.

Nevertheless, India has given startups an important place in its ‘Atmanirbhar Bharat’ Programme.

According to data cited by the Vice President since the launch of Startup India initiative, India has more than 38,000 recognised startups across 590 districts that have created nearly 400,000 jobs.

In fact, at the ceremony of the 1st SCO Startup Forum inaugurated last month, Commerce and Industries Minister Piyush Goyal said that India has provided its entrepreneurs with a solid start-up ecosystem.

“We provided an encouraging framework to have more Startups come up with brilliant ideas”, he had said. He said that the Prime Minister has been at the forefront of India's engagement with the start-ups.

Quoting PM Modi, he had said, “The Prime Minister Shri Narendra Modi has said, ‘Startups are the engines of exponential growth manifesting the power of innovation.’”

Some of the ways in which the Indian government is helping start-ups to grow is to acknowledge their work. “India recognised some very interesting Startups in the first-ever national Startup award programme and we provided an encouraging framework to have more Startups come up with brilliant ideas,” he said.

Many steps have been taken in the past to encourage the startup system in India in sectors ranging from defence to healthcare to technology and education and research sector.

Some of the examples of the same include the Defence India Startup Challenge (DISC 4), launched recently to boost innovation in the defence sector. iDEXFauji is the key initiative which has been implemented effectively in the country and plays a significant role towards achieving self-reliance in the spirit of the Atmanirbhar Bharat campaign, Defence Minister Rajnath Singh said.

Similarly, India has signed several deals with other nations to help Indian startups grow in their respective fields. The MoU signed recently between Israel's Start-Up Nation Central and India’s International Centre for Entrepreneurship and Technology (iCreate) is an example of the same. The MoU was signed to enable start-ups and companies of both nations to work together in the technology sector and give new and innovative technologies to the world for the greater good.