Unite against terrorism: PM Modi's call to all nations, all governments, all religions 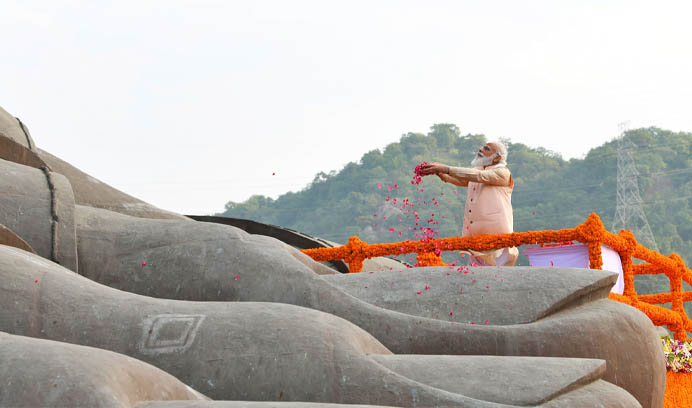 Giving a strong call to the world to unite against terrorism, Prime Minister Narendra Modi on Saturday said the way some people had come out in support of terrorism was a matter of global concern.

Addressing the Ekta Diwas celebrations on the birth anniversary of Sardar Vallabh Bhai Patel at Kevadia in Gujarat, he urged "all countries, all governments, all religions" to unite against terrorism.

Prime Minister Modi's remarks came in the backdrop of Islamist terror attacks in France and the protests by many Islamic nations and groups after the strong stand taken by French President Emmanuel Macron in condemning the attacks and reaffirming his country's commitment to Freedom of Expression.

Condemning the attacks in France after a woman was beheaded and two others killed inside a church in Nice on Thursday days after a French school teacher was beheaded by his Chechen student in Paris, Prime Minister Modi had said: "I strongly condemn the recent terrorist attacks in France, including today's heinous attack in Nice inside a church. Our deepest and heartfelt condolences to the families of the victims and the people of France. India stands with France in the fight against terrorism."

Speaking from Kevadia today, the Prime Minister maintained that a sense of peace, brotherhood and mutual respect was the true identity of humanity. No one could ever get welfare from terrorism and violence, he said.

India's diversity was its existence, he pointed out, adding that it was this power of this "unity of India" which kept others on their toes. "They want to make this diversity our only weakness," he said. Without naming any country, PM Modi stressed the need to recognize such forces and remain cautious.

His discussions will focus on economic cooperation and community welfare