Agreements must be respected in 'their entirety' for normalcy in India-China ties: EAM Jaishankar 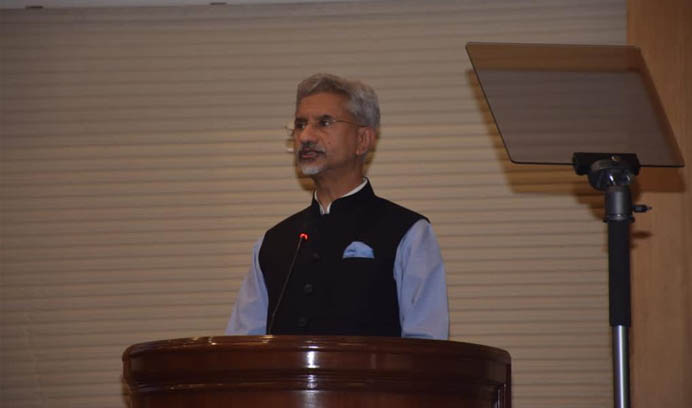 Agreements between India and China "must be respected scrupulously in their entirety" to restore normalcy between the two countries, External Affairs Minister S Jaishankar has said, reiterating that any attempt to change the status quo could not be accepted.

"Where the Line of Actual Control is concerned, any attempt to unilaterally change the status quo is unacceptable," he said while delivering the Sardar Patel Memorial Lecture 2020 on Saturday.

Noting that "peace and tranquility in the border areas" provided the basis for expanded cooperation", Jaishankar said, "the relationship cannot be immune to changes in the assumptions that underpinned it".

According to the External Affairs Minister, ties between India and China were stable for three decades, "as the two nations addressed inherited challenges and new circumstances". But this relationship had come under "severe stress" as the COVID-19 pandemic unfolded, he pointed out.

Large civilizational states re-emerging in close proximity will not have naturally easy ties and their interests are best served by a "sustained engagement based on mutual respect and mutual sensitivity".

The comments came amid the ongoing border standoff with China along the LAC in Eastern Ladakh, with several rounds of military and diplomatic talks having been held to defuse the situation and push through a process of disengagement between the armed forces of the two countries.

Referring to India's steady rise in a changing world, Jaishankar said a key element of that journey was its expanding ties with major power centres. "In virtually every case, the content of its ties grew substantially, whetehre weighed in terms of politics, security, onomy, technology or community".

Explaining that some nations were "more openly supportive" while some others "took nuanced positions", he said that the extent of convergence varied "not just by the partner but on occasion, even by geography".

On India-US ties, Jaishankar said successive governments on both sides have "steadily pursued what has become a non-partisan endeavour", with a strong economic and technological complementarity laying a strong foundation. At the same time India's relations with Russia had been steady.

Outlining India's ties with EU members, he pointed out that India's partnership with France had "assumed strategic connotations" even as the relationship with Germany was coming into its own. "As a region full of capabilities, resources and best practices, Europe is a natural partner for a more ambitious India," the External Affairs Minister said.

He also used the occasion to talk about the need to accelerate India's partnership with Japan, which can make a difference to India's participation in global supply chains.

The impact of COVID-19 and the road to recovery

Noting that India had established itself as the pharmacy of the world during the COVID-19 pandemic, Jaishankar said the country not only ramped up production to meet a spike in global demands but actually supplied medicines to 150 countries, "many of them on a grant basis".

The attention was now shifting to how India would help in ensuring that COVID vaccines were "affordable and accessible".

Talking about the post-COVID world, Jaishankar said policy-makers across the world dealing with the pandemic were now focused on economic and social recovery.

"Nations have made decisions in line with their particular circumstances," he said, adding that addressing both lives and livelihood had been a major concern for all. "The pathway to recovery, however, also has steps of resilience that reflect the pandemic experience," he pointed out.

The pandemic came when global suspicions were already rising and trade frictions were well advanced, Jaishankar observed, adding that the "behaviour of states during this period further highlighted the value of more dependable supply chains".