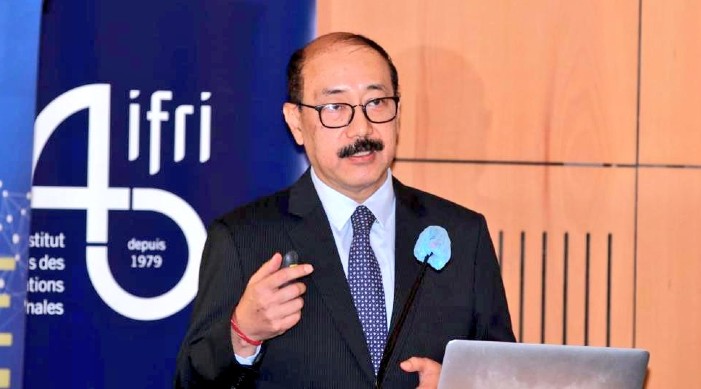 Speaking on India’s foreign policy in the post-covid world in Paris on October 29, during his visit to France, the Foreign Secretary said, “The events of this year have demonstrated how imperative it is for like-minded countries to coordinate responses to various challenges that the pandemic has brought to the fore.”

He said that the pandemic has reaffirmed the centrality of multilateralism in the interconnected world not only for matters of international security but also international governance.

He said, “For the global system, the pandemic has been the most catastrophic event since World War II. An already complicated world has become even more so with several geopolitical issues erupting simultaneously along with the pandemic. This has accelerated a fundamental rebalancing in the international system.”

As India resumes the membership of the United Nations Security Council next year, he said, India is seeking coordination with France on immediate challenges as well as in setting strategic directions for the UN system. “We are working with France in building a series of multilateral responses to global challenges,” he said.

Some of the examples of India-France bilateral coordination and cooperation are the International Solar Alliance set up by both nations. The Coalition for Disaster-Resilient Infrastructure (CDRI) which aims for a climate-friendly and disaster-resilient future for all is another example with France being a partner.

“And I must mention here that India has stayed the course and, on some parameters, exceeded the commitments it had made in this city at COP21. In India’s push against climate change and its striving for a greener economy, driven more and more by renewable energy, the Paris Agreement of 2015 remains an article of faith and a call to action,” he said.

Not only France but India is partnering with other countries in Europe in order to transform India to make it more green, more digital and more technology-driven, Europe stands out as a partner of choice.

In the present challenging times, India can become a global partner, he said. The present situation of geopolitics will shape the nature and terms of India’s engagement with major economies like the United States, China, the European Union, Japan, ASEAN among others, he said.

“The practices that India perfects at home will inevitably become exportable abroad. They too will play out, obviously differently in different geographies,” he said. “The need for greater global conversations on resilient supply chains. Some of these are ongoing G2G exercises; others would be discussions with business,” Shringla added.

The Foreign Secretary also reaffirmed India’s support in fighting COVID-19 pandemic saying that, “Like France, India too has suffered enormous consequences of the pandemic. Being almost 20 times your population, our challenges were particularly daunting.”

“The world has been learning and re-learning how to deal with the pandemic and so have we,” he said.

He highlighted various initiatives taken by the Indian government to tackle the coronavirus pandemic in the country. “An early lockdown, when numbers were low, gave us time to ramp up capacities, and to prepare ourselves for a long-drawn spell of pandemic protocols,” he said. This has allowed India to tackle the pandemic and keep the burden on our health infrastructure within manageable limits,” he said further.

To mitigate the economic impact of the pandemic, the Indian government announced a massive $266 billion stimulus package which amounts to be almost 10% of India’s GDP, he said. India ensured rations to 800 million people and the operation happens to be the world’s largest such operation, he said.

With France, India has had cordial relations since 1998. The relationship has been given a push by Prime Minister Narendra Modi and French President Emmanuel Macron as they attach top priority to the strategic partnership between the two countries, he said.

The Foreign Secretary, Harsh Vardhan Shringla expressed India’s solidarity with France in its fight against terrorism condoling the deaths of people in the recent attacks in French city of Nice.

In French, he said, “Je voudrais commencer par exprimer la solidarité du peuple indien avec la France dans cette lutte contre le terrorisme et la radicalisme. (I would like to start by expressing the solidarity of the Indian people with France in this fight against terrorism and radicalism). Our Prime Minister has also condemned today’s terrorist attack in Nice in the strongest words.”

“It was horrifying to hear about the two recent terrorist incidents in France, one of which, as is very often the case, had its origins in our western neighbourhood – Pakistan. For the past three decades, we have experienced what unbridled radicalism can wreak – and what malevolent violent forces it can unleash,” he said.

Both nations face similar threats on security in the form of radicalism and terrorism and cyber-security, he said. “Both India and France have suffered,” he said.

Nevertheless, he said even in these times of crisis, India awaits the 16th India-EU Leaders Summit in 2021 which might add another layer to the friendship between two sides.