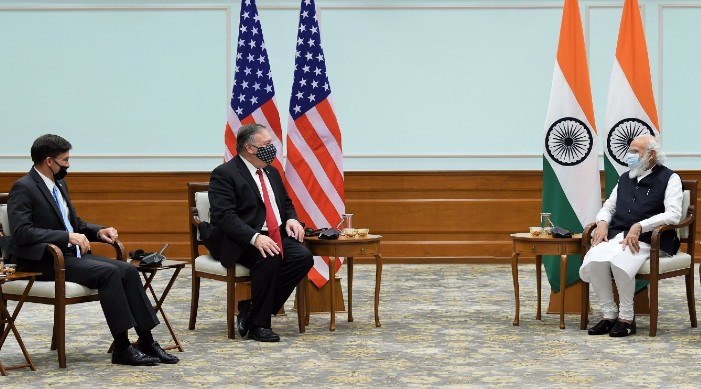 Based on increasing trust level and mutual understanding, India and the US enjoy warmth in their bilateral ties

The US has reaffirmed its strong support to India for a permanent membership in the reformed UNSC and also for its early entry into the Nuclear Suppliers Group. While it indicates growing trust and mutual understanding between the two countries, India and the US have shown that they can be a factor of peace and stability in the Indo-Pacific region where China has proved to be an elephant in the room.

In this background their decision, during the just concluded two plus two dialogue, to expand joint capacity building efforts with partner countries in the Indo-Pacific and to participate in multilateral peacekeeping training exercises merit attention.

Both India and the US during the meet, affirmed their commitment to pursue increased cooperation between the Indian military and US Central Command and Africa Command, including broader participation in exercises and conferences, so as to promote shared security interests.

The Indian side led by Defence Minister Rajnath Singh and External Affairs Minister S Jaishankar and the US side headed by Secretary of State Mike Pompeo and Secretary of Defence Mark T Esper reaffirmed their commitment to deepening bilateral defense consultation and collaboration and to exploring opportunities to expand cooperative capacity-building efforts with partners across the region.

Even in the field of counter terrorism, cooperation between the two countries has seen considerable progress with enhanced information sharing and operational cooperation. The bilateral Joint Working Groups on Counter-Terrorism and Designation Dialogue meet regularly, among other things, to enable cooperation in pursuing sanctions and designations of terrorist groups and individuals.

On the investment front, while the U.S. firms continue to invest in India and have established strong presence, Indian companies have also been investing in different states in the US in diverse sectors such as IT, pharma, manufacturing, automotive, energy, defence, creating jobs and new economic opportunities.

Similarly in the space cooperation, Indian Space Research Organisation (ISRO) and US National Aeronautical and Space Administration (NASA) have been working together on a range of projects. The joint ISRO-NASA microwave remote sensing satellite scheduled for launch in 2022-2023, NASA-ISRO Synthetic Aperture Radar (NISAR), will help scientists to better understand some of earth’s complex systems and hazards.

On the energy front, the launch of India-US Strategic Energy Partnership (SEP) in April 2018 has set the tone for expanding cooperation in the energy sector. Bilateral hydrocarbons trade has touched US$ 9.2 billion during 2019-20. The US is the fourth largest source of crude oil for India. India is now the fifth largest export destination for US LNG.

The four primary pillars of India-US Energy Partnership are power and energy efficiency; oil and gas; renewable energy; and sustainable growth. India and the US are leading joint research and development on smart grids and energy storage to increase resilience and reliability of the electric grid.

In the field of technology and innovation, partnership between the two countries continues to grow. Indian high skilled professionals add to the innovation and competitive edge of the US tech companies, and contribute in critical sectors such as health, IT and financial services sectors.

According to NASSCOM, Indian IT industry added US$ 57 billion to US GDP in FY 2017, and created about 170,000 jobs directly in the US. There have been large investments by global technology majors in India which has received over US$ 20 billion of foreign investment flows during this year from firms such as Google and Amazon, which have long term plans for engaging with India.

Also, people to people linkages have emerged as one of the main drivers of India-US partnership. Four million plus strong Indian and Indian American community members in the US continue to play an important role in deepening India US friendship.