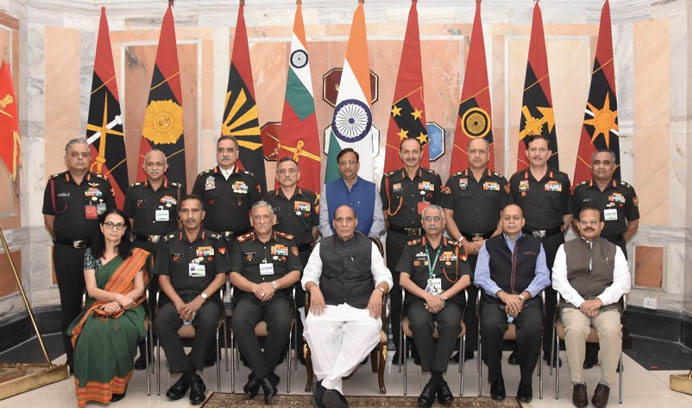 Commending the Indian troops for standing firm on the borders with China, Defence Minister Rajnath Singh has said that "the ongoing talks for peaceful resolution of crisis will continue".

Addressing the Army Commanders' Conference on Wednesday, Singh complimented the forces for the high standard of operational preparedness and capabilities which he experienced firsthand during visits to forward areas.

The official statement issued by the Ministry of Defence did not, however, name China and quoted the Defence Minister as talking about the situation on India's "Northern borders".

India and China have held seven rounds of senior commander level talks aimed at disengagement since May, when the Indian Army and China's People's Liberation Army (PLA) became engaged in a tense standoff along the Line of Actual Control (LAC) in Eastern Ladakh.

After the last round of talks on October 12, the two sides had agreed not to turn differences into disputes.

"Both agreed to maintain dialogue and communication through military and diplomatic channels, and arrive at a mutually acceptable solution for disengagement as early as possible. Both sides agreed to earnestly implement the important understandings reached by the leaders of the two countries, not to turn differences into disputes, and jointly safeguard peace and tranquility in the border areas," a joint statement issued after the meeting had said.

Tensions mounted after 20 Indian soliders were killed in action in Eastern Ladakh's Galwan Valley on the night of June 15. China also suffered casualties though it has never disclosed a figure for the number of soldiers who died.

During his address, Singh paid tributes to the bravehearts of Galwan Valley in addition to those in Kashmir and the North East who laid down their lives defending the country.

Over the past few months, the Indian Army has increased its mobilisation near stretches of the LAC where Chinese troops have been active. Adequate supplies, including those needed in extreme winter conditions, have been provided to personnel in the forward areas.

“It is our national responsibility to ensure availability of best weapons, equipment and clothing to our troops braving extreme weather and hostile forces to defend our territorial integrity,” Singh said in his address at the Army Commanders' Conference.

The Defence Minister also used the occasion to praise the Indian Army for its firm response to cross-border terrorism in Jammu and Kashmir and ceasefire violations by Pakistan.

“I compliment the excellent synergy between the CAPF/ Police forces and the Army in tackling the menace of terrorism in Jammu and Kashmir. It is due to the synergised operations in the Valley that the Union Territory of Jammu and Kashmir is moving to a stable and peaceful environment conducive for overall growth and development,” he noted.

The Army Commanders’ Conference is an apex level biannual event where the Indian Army's top leadership is discussing "all aspects of existing security scenarios, situation along the borders and in the hinterland and challenges for the present security apparatus".