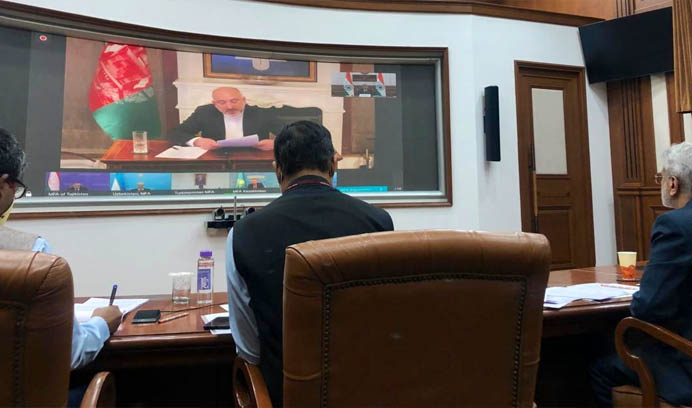 India and Central Asia on Wednesday called for building a comprehensive and enduring partnership between the two sides on the basis of their historical, cultural and civilizational bonds as well as traditionally close people-to-people contacts.

Holding the 2nd meeting of the India-Central Asia Dialogue in the digital video-conference format, the two sides in their joint statement strongly condemned terrorism in all its forms and manifestations and reaffirmed the determination of their countries to combat this menace by destroying terrorist safe-havens, networks, infrastructure and funding channels. They also underlined the need for every country to ensure that its territory is not used to launch terrorist attacks against other countries

They welcomed the participation of Afghanistan in the India- Central Asia Dialogue. They called for the settlement of the Afghan conflict on the principle of Afghan-led, Afghan-owned and Afghan-controlled peace process.

They expressed their interest in strengthening cooperation for the development and economic reconstruction of Afghanistan, including through the implementation of infrastructure, energy, transit and transport projects. They also emphasized preserving the socio-economic development and political gains made by Afghanistan in the last 19 years. They extended support for a united, sovereign and democratic Republic of Afghanistan.

They welcomed the provision by India of US$ 1 billion Line of Credit for priority developmental projects in fields such as connectivity, energy, IT, healthcare, education, agriculture and others.

However, India announced providing additional US$1 billion for the Central Asian countries’ development.

They welcomed India’s offer to provide grant assistance for implementation of High Impact Community Development Projects (HICDP) for furthering socio-economic development in the countries of the region.

They emphasized the importance of concerted efforts to further expand trade and economic cooperation including promoting direct ties between the businesses of India and the Central Asian countries.

They drew attention to the significant potential for joint initiatives in the implementation of cultural events, educational and research projects with the participation of Afghanistan and expressed their intention to promote the participation of the Afghan side in international youth forums, festivals, competitions, scientific conferences, exhibitions and other joint events.

They underscored the importance of humanitarian, cultural, educational and tourism cooperation between India and the Central Asian countries. Increasing tourism arrivals, creating tourism trails across the region, making the visa process simpler and encouraging investment in tourism infrastructure was emphasized.

Taking note of the large number of students from India and the Central Asian countries studying in each other’s higher educational institutions, they stressed the importance of ensuring their social welfare.

They expressed appreciation to India for hosting of the Central Asian media delegation in India in April 2019, the training of Central Asian diplomats at the Sushma Swaraj Foreign Service Institute in New Delhi in July 2019 and the Annual International Dance Festival with a focus on Central Asia, organized by the Indian Council of Cultural Relations (ICCR) in New Delhi in December 2019.

In his opening remarks at the meeting, Jaishankar said India and Central Asia share ancient historical and cultural linkages. “We consider Central Asia as India’s ‘extended neighbourhood’. We share a common geography which facilitated continuous exchange of people, ideas and goods in both directions and left indelible imprints on our customs, traditions and languages,” the EAM said.

He also expressed regret that the India-Central Asia Dialogue which was planned to be held in New Delhi in a physical format in April this year, could not take place because of the onset of the Covid-19 pandemic.

The EAM said as developing countries, India and Central Asian nations share common perspectives on opportunities and challenges for their development.

“We also share commonality of views on various regional and international issues. We face common challenges of terrorism, extremism, drug trafficking and such other issues. All these commonalities make us a natural partner in our developmental journey,” Jaishankar said.