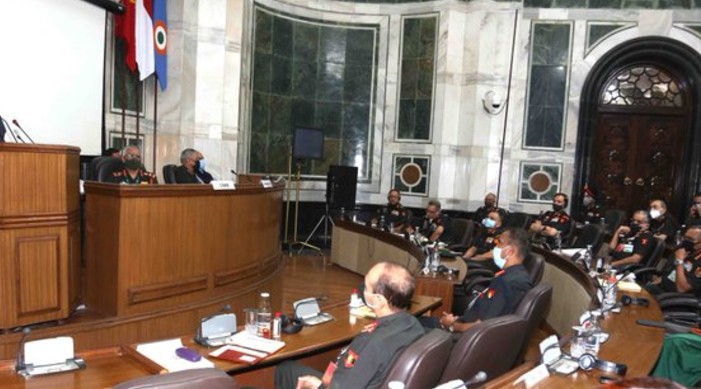 Expressing pride over the initiatives undertaken by the Indian Army in the "current security environment", Defence Minister Rajnath Singh has said the government was committed to strengthen and help the force in achieving advantages in all areas.

Addressing top officers at the Army Commanders' Conference on Wednesday, Singh also praised the Indian Army for successfully addressing challenges to the security and sovereignty of this country since Independence. "Be it the problem of terrorism, insurgency or any external attack, the Army has played a significant role in neutralising those threats," he said.

The four-day conference is being held in the backdrop of ongoing tensions along the border with China which has seen a standoff between the Indian Army and the Chinese People's Liberation Army..

"The Ministry of Defence is committed to facilitate the Army in their forward movement on road to reforms and help them in achieving advantages in all areas. We will leave no stone unturned to strengthen the arms of our Armed forces," Singh said in a series of tweets after the address.

While assuring complete support, the Defence Minister noted that Integrated Battle Groups, Integrated Theatre Commands and Integrated Air Defence Commands will be game changers in the way Indian Armed forces fight future wars. The establishment of the Defence Cyber and Space Agencies which will enhance the kinetic potential of the forces, he added.

Appreciating the Indian Army's efforts to develop niche technologies, he referred to the in-house development of the “Secure Application for Internet (SAI)”, an application for secure messaging within the Indian Army, said a statement issued by the Ministry of Defence.

The Defence Minister complimented the Indian Army for significant contributions in defence diplomacy to further India's national security interests by creating sustainable cooperative relationships with foreign armies. He also appreciated the role played by Indian Armed Forces in the ongoing fight against COVID-19.

During his address, Singh complimented the Border Roads Organisation (BRO) for working under difficult conditions to connect far flung areas so that people living in those locations are connected and faster development is facilitated, the statement said.

The conference is discussing, among other issues, operational preparedness along the Line of Actual Control (LAC) with China and infrastructural development including roads in India's border areas.

The Army Commanders’ Conference is an apex level biannual event where the Indian Army's top leadership is discussing "all aspects of existing security scenarios, situation along the borders and in the hinterland and challenges for the present security apparatus".

According to the Ministry of Defence, the conference is also focusing on issues pertaining to organizational restructuring, logistics, administration and human resource management.