We live in a more uncertain world with sharper fault lines: EAM Jaishankar 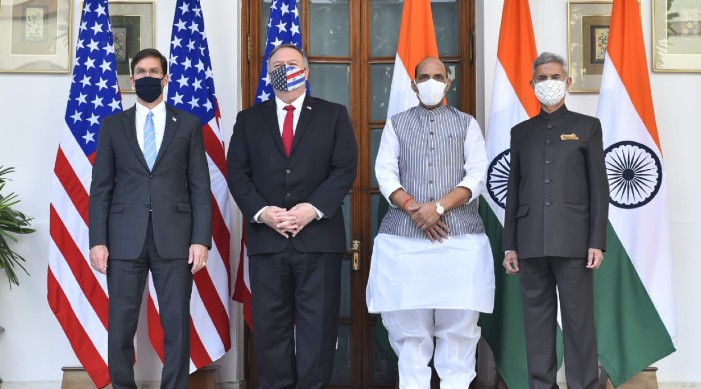 Indian Ministers with their US counterparts at 3rd 2+2 dialogue

While welcoming the US delegation to India for the 3rd two-plus-two meeting, External Affairs Minister S Jaishankar in his opening remarks on Tuesday said he attached great importance to this format of interaction between the two countries.

He cited three reasons for attaching high importance to the two-plus-two format: “First, we live in a more uncertain world with much greater stresses and sharper fault lines. For most countries, that means giving security a greater salience in their foreign policy. As major powers, this is even more so in our case.”

He gave growing bilateral engagement between the two countries, especially in the last two decades as the second reason for attaching importance to this format of dialogue.

“Over the last two decades, our bilateral relationship has grown steadily in its substance, facets and significance. The accompanying comfort levels today enable us to engage much more intensively on matters of national security. This format is clearly tailored to that purpose,”

The third reason cited by EAM Jaishankar included the growing need to uphold rules-based international order and the ability of the two countries to work closely in defence and foreign policy areas.

“At a time when it is particularly important to uphold a rules-based international order, the ability of India and the US to work closely in defence and foreign policy has a larger resonance. Together, we can make a real difference when it comes to regional and global challenges, whether it is in respecting territorial integrity, promoting maritime domain awareness, countering terrorism or ensuring prosperity,” the EAM said in his opening remarks before the two sides were to begin their two-plus-two dialogue.