US will stand with India to counter any threat: US Secretary of State Pompeo 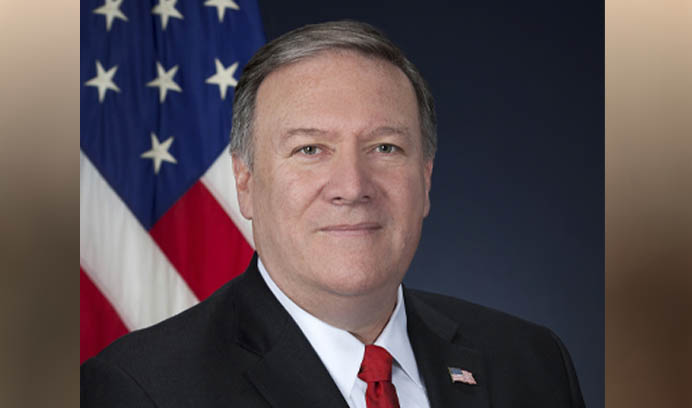 Addressing a joint media conference with External Affairs Minister S Jaishankar, Defence Secretary Mark Esper and Defence Minister Rajnath Singh after the 3rd India-US two plus two ministerial dialogue, US Secretary of State Mike Pompeo on Tuesday said America will stand with people of India as they confront threats to their sovereignty and liberty.

Hitting out at the Chinese Communist Party, the US Secretary of State said the US leaders and citizens see with increasing clarity that the “CCP is no friend to democracy, the rule of law and transparency.”

He further said the US and India are taking steps to strengthen cooperation against all manners of threats and not just those posed by the CCP, Pompeo said.

The US Secretary of State said during the visit they visited the War Memorial to honour the soldiers that sacrificed their lives for the world’s largest democracy, including the 20 Indian Army personnel who were killed by the Chinese soldiers in the Galwan Valley on June 15.

In his remarks, Defence Minister Rajnath Singh said, “We have had comprehensive discussions on key aspects of our bilateral and multilateral cooperation. Our military-to-military cooperation with the US is moving forward very well.”

He also said, “We reaffirmed our commitment to peace and security in Indo-Pacific region.”

On the other hand, EAM Jaishankar said, “The 2+2 dialogue has a political-military agenda that underlines our close bilateral relationship.”

He also said that Indo-US security convergences have grown and the Indo-Pacific was the focus of their discussion during the talks. He also said the two sides “reiterated the importance of peace, stability and prosperity for all countries in this region.”

US Defence secretary Mark Esper noted that the bilateral defence cooperation is continuing to grow.

Earlier in their joint statement, the two sides reiterated their commitment to maintaining a free, open, inclusive, peaceful, and prosperous Indo-Pacific built on a rules-based international order, underpinned by ASEAN centrality, rule of law, sustainable and transparent infrastructure investment, freedom of navigation and over flight, mutual respect for sovereignty, and peaceful resolution of disputes.

Highlighting the importance of securing the economic and security interests of all stakeholders having a legitimate interest in the region, the Ministers welcomed the growing understanding on the Indo-Pacific among like-minded countries. They reaffirmed that closer India-U.S. cooperation will support shared interests in promoting security and prosperity in the Indo-Pacific region and beyond. They also emphasized that the Code of Conduct in the South China Sea should not prejudice the legitimate rights and interests of any nation in accordance with international law.

They welcomed the recent convening of the Second Australia-India-Japan-United States Quadrilateral Ministerial Meeting in Tokyo on October 6, 2020.They appreciated the exchange of views on regional issues of mutual interest, as well as ongoing cooperation related to maritime security, humanitarian assistance and disaster relief, regional connectivity, health security and counter terrorism. The Ministers also welcomed the fact that these Consultations would now be held annually. They expressed their support for further strengthening Quad cooperation through expanded activities, including initiating a dialogue among the development organizations of partner countries.

The Ministers expressed their support for sustainable, transparent, quality infrastructure development in the Indo-Pacific region. They looked forward to furthering collaboration between USAID and India’s Development Partnership Administration (DPA) with a view to undertaking joint projects in the region.

The Ministers welcomed the establishment of a permanent presence of the U.S. International Development Finance Cooperation (DFC) in India this year. The United States expressed strong support for the Coalition for Disaster Resilient Infrastructure (CDRI) as a leading mechanism for promoting regional economic development. Recognizing the need to contain the build-up of sovereign debt in developing and low-income countries by ensuring responsible, transparent, and sustainable financing practices for both borrowers and creditors, the Ministers looked forward to exploring ways to cooperate under the Blue Dot Network.

They also looked forward to the Second Indo-Pacific Business Forum (IPBF) to be held on October 28-29, 2020.
Building on a strong record of peacekeeping cooperation, the Ministers decided to expand joint capacity building efforts with partner countries in the Indo-Pacific and to participate in multilateral peacekeeping training exercises.

The Ministers discussed their shared interest in promoting a sovereign, peaceful, united, democratic, inclusive, stable and secure Afghanistan, including support for an Afghan-led and Afghan-owned peace process. They applauded India’s development assistance, and efforts to build trade linkages and multi-modal connectivity infrastructure for Afghanistan to enhance its regional connectivity to sustain growth and development over the long term.

The United States congratulated India for its non-permanent membership of the United Nations Security Council (UNSC) for the term 2021-2022. The Ministers reiterated their commitment to work together in close coordination at the UNSC and in International Organizations. The US also reaffirmed its continued strong support for India’s permanent membership in a reformed UNSC as well as for India’s early entry into the Nuclear Suppliers Group (NSG).

With regard to the 15th anniversary of the inaugural U.S.-India Defense Framework Agreement, the Ministers commended what has become a comprehensive, resilient, and multi-faceted Major Defense Partnership (MDP) between India and the United States.

They applauded the significant step of the signing of the Basic Exchange and Cooperation Agreement (BECA). They also welcomed enhanced maritime information sharing and maritime domain awareness between their Navies and affirmed their commitment to build upon existing defense information-sharing at the joint-service and service-to-service levels and explore potential new areas of mutually beneficial cooperation.

The Ministers reaffirmed their commitment to deepening bilateral defense consultation and collaboration and to exploring opportunities to expand cooperative capacity-building efforts with partners across the region.

They also affirmed their commitment to pursue increased cooperation between the Indian military and US Central Command and Africa Command, including broader participation in exercises and conferences, so as to promote shared security interests. The U.S. appreciated India’s leadership in establishing an Information Fusion Centre for the Indian Ocean Region (IFC-IOR).

The Ministers expressed satisfaction at the ongoing progress in the implementation of Logistics Exchange Memorandum of Agreement (LEMOA) and Communications, Compatibility and Security Agreement (COMCASA), including the expansion of secure communications capabilities to include secure video teleconference capabilities between their respective Navies, Armies and Air Forces as well as between respective Foreign and Defense Ministries.

The Ministers welcomed the convening of the Military Cooperation Group (MCG) later this year to review bilateral military-to-military engagement including joint exercises, training and expert exchanges. They looked forward to interaction between the Special Forces of India and the United States.

The Ministers welcomed the inclusion of the Royal Australian Navy in the U.S.-India-Japan MALABAR Naval Exercise scheduled to be held in the Bay of Bengal and the Arabian Sea in November 2020.

Highlighting the importance of deepening maritime cooperation and the growing sophistication of U.S.-India naval cooperation, the Ministers welcomed the PASSEX carried out by the Navies of both countries. They also looked forward to the convening of the next edition of the Tri-Services Amphibious TIGER TRIUMPH HADR Exercise and Army Exercises YUDH ABHYAS and VAJRA PRAHAR in 2021.

The Ministers decided to work together to realize the development of their respective defense industries. Acknowledging India’s contributions to the global supply chain of major defence platforms and commitment to defense innovation, the Ministers reiterated the importance of Defence Technology and Trade Initiative (DTTI), and stated their intention to fast track projects under DTTI.

They noted with satisfaction the signing of a Statement of Intent (SoI) at the 10th DTTI meeting to strengthen dialogue on defence technology cooperation on several specific DTTI projects as well as a DTTI Standard Operating Procedure (SoP) for identification and development of joint projects. India looked forward to the participation by the U.S. Government and defence industry at the upcoming Aero-India in February 2021.

Recognizing the importance of cooperation in defence innovation, the Ministers welcomed the inaugural meeting between the Indian Defence Innovation Organization (DIO-iDEX) and U.S. Defense Innovation United (DIU) in July 2020. They also looked forward to the inaugural Industrial Security Annex (ISA) Summit later this year which would further strengthen defence industrial cooperation between both countries.