Signing of BECA with US a significant achievement: Rajnath Singh 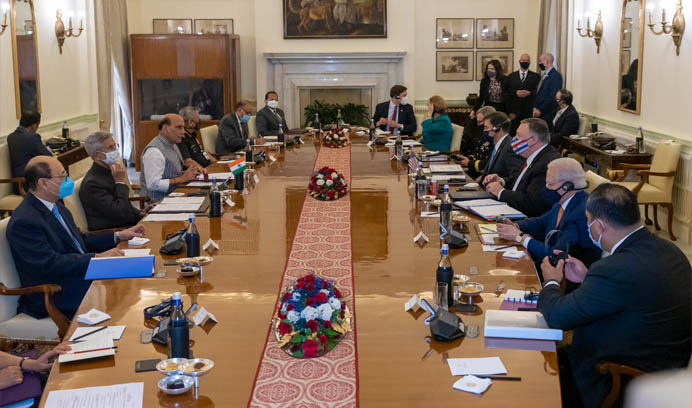 With this agreement, the two countries will share information of both unclassified and classified categories

India and the US on Tuesday signed the fourth and last foundational defence agreement, the Basic Exchange and Cooperation Agreement (BECA) which will facilitate the two countries in sharing sensitive information regarding satellite data, maps, nautical and aeronautical charts and others.

With this agreement inked, the two countries will share information of both unclassified and classified categories and will help India in improving the military accuracy of automated hardware systems and weapons like cruise missiles, ballistic missiles and drones. It will also help India in gaining topographical images on a real time basis from the US military satellites.

India and the US have already signed the General Security of Military Information Agreement (GSOMIA) in 2002, the Logistics Exchange Memorandum of Agreement (LEMOA) in 2016 and the Communications Compatibility and Security Agreement (COMCASA) in 2018.

After inking the BECA, Defence Minister Rajnath Singh said, “We have had comprehensive discussions on key aspects of our bilateral and multilateral cooperation. Signing of Basic Exchange and Cooperation Agreement for Geo-spatial Cooperation, BECA, today after signing of LEMOA in 2016 and COMCASA in 2018 is a significant achievement in that direction.”

In his statement after the 3rd edition of the Indo-US two- plus-two dialogue, the Defence Minister said, “We also explored probable capacity building and other joint cooperation activities in third countries, including our neighbourhood and beyond. We have convergence of views on a number of such proposals and will take those forward.”

He welcomed the acceptance of India’s request for cooperation in the advanced field of maritime domain awareness. “Both sides agreed to comprehend the requirements and initiate processes for joint development of requisite systems and expertise,” the Defence Minister said.

During the meeting, both sides had very candid and useful discussion in the defence industrial cooperation area. “Recent initiative of 'Atmanirbhar Bharat' in Defence sector was underlined as a key driver and a guiding factor of our Defence Industrial Cooperation. I highlighted the capabilities of Indian Defence Industry and their usefulness in the supply chain of major US platforms and systems,” Rajnath Singh said in his statement.

“We have identified priority Near-Term projects for joint development between respective agencies, which need to be fast tracked under the DTTI and resolved to work together in Defence R&D more efficiently,” he added.

The two sides also discussed innovation in the defence field during the two-plus-two meeting.

“The instrument of Industrial Security Agreement (ISA) and iDEX/DIU MOl, which were agreed upon and signed during our last 2+2 meetings, are beginning to bear fruit. We welcomed holding of the inaugural meeting of iDEX-DIU in July 2020 through Video Conferencing and are looking forward to the first ISA Summit this year,” the Defence Minister said.

At the meet, both sides also shared their assessment of the security situation across the Indo-Pacific. “We reaffirmed our commitment to peace, stability and prosperity of all countries in this region. We also agreed that upholding the rules based international order, respecting the rule of law and freedom of navigation in the international seas and upholding the territorial integrity and sovereignty of all states are essential,” Rajnath Singh said.

India and the US welcomed Australia joining the forthcoming Malabar Exercise.