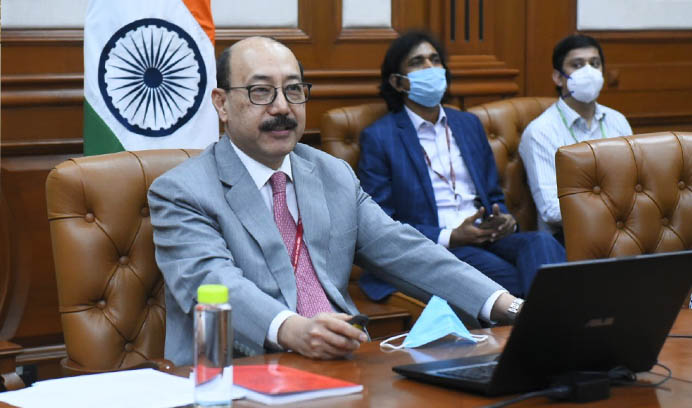 With the Indian diaspora growing around the world, there is an increased demand for learning Indian languages in foreign educational institutions

With the new National Education Policy (NEP) introduced by India having a focus on European languages, the future of exchanges between India and Europe is brighter than ever, Foreign Secretary Harsh Vardhan Shringla said today.

Delivered the closing address on the Day of Languages celebrated by Mayo College, Ajmer and Goethe Institute, he said, “Perhaps you are aware that the New Education Policy recently introduced by the Govt. of India gives impetus to the learning of foreign languages, half of which are European languages, that is, French, German, Spanish and Portuguese. The future for exchanges between India and Europe, therefore, is brighter than ever.”

A key element that intertwines Europe and India is, in fact, languages, he pointed out.

He said that in the recent years, Indian languages have gained importance globally. He said with the Indian diaspora going around the world, a demand for learning Indian languages in foreign educational institutions has been created.

“Linguistic trends are becoming more complex with the spread of foreign languages to remote corners of India and international content being localised in multiple Indian languages. Even technology has begun to adapt to the diversity of Indian languages,” Shringla said.

Apart from that, he said, the Indian literary traditions are of much interest to people beyond the borders of India. “We see greater interest in establishing departments and chairs for Sanskrit and other major Indian languages in foreign universities,” he said.

He said that India and Europe have one thing in common which is the language diversity. He said while India alone has 22 scheduled languages in its Constitution and more than a thousand mother tongues, the European Union identifies 24 official languages and various other dialects.

“The Indo-European language family, the Dravidian, Austric and Tibeto-Burman languages, among others, also call India their home,” he said. “In fact, this diversity is also found in sign languages, representing the truly inclusive nature of the spoken word,” he said further.

He also referred to several foreign scholars such as Johann Wolfgang von Goethe, Friedrich Max Müller and other European scholars who started a seamless flow of knowledge exchange between languages, through their study and translation of great Indian literary and philosophical texts.