US Secretary of State to land in India tomorrow 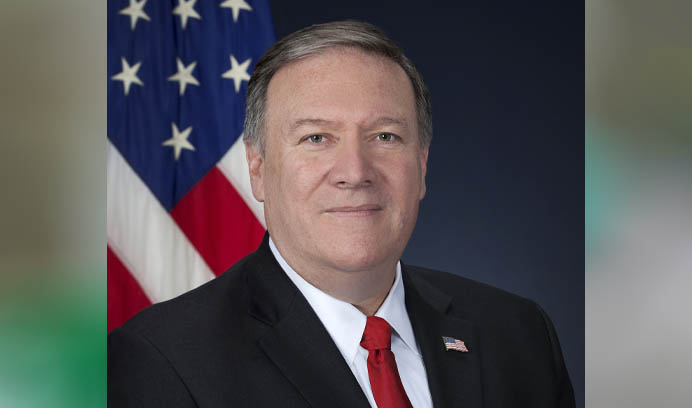 While Pompeo is visiting India tomorrow to participate in two plus two ministerial dialogue, he will be also visiting Sri Lanka and Maldives

Secretary of State Mike Pompeo’s visit to India, Sri Lanka, Maldives and Indonesia will begin this week with Pompeo landing in New Delhi tomorrow to hold much talked about India-US two plus two ministerial dialogue.

Pompeo’s visit is being seen as Washington’s efforts to bolster ties with Asian nations against common enemy China.

A report published in the Malaysian news portal, Free Malaysia said that it will be part of the strategic pushback against China’s growing economic and military power in the South Asian region just the final week before the US Presidential elections.

While Pompeo will begin his tour from India, in the second leg, he will be visiting Sri Lanka and Maldives. He will conclude his trip in Indonesia which is also locked in territorial disputes with China in the South China Sea, the report said.

Principal Deputy Assistant Secretary at the State Department’s Bureau of South China and Central Asian Affairs, Dean Thompson said, “We’re looking forward to strengthening critical relationships with our friends and partners, emphasizing our deep commitment to the Indo-Pacific and advancing our vision for long-term partnership and prosperity in the region.”

During his 2+2 India-US dialogue, he along with US Secretary of Defence Mark Esper are likely to meet their counterparts, External Affairs Minister S Jaishankar and Defence Minister Rajnath Singh.

The sides are likely to discuss bilateral issues on trade, defence and security. Both nations are likely to sign an agreement that will give it access to sensitive US satellite data to help improve targeting of missiles and drones, Indian officials said.

As per the maritime security expert at the Center for Strategic and International Studies in Washington, Greg Poling said, “Pompeo’s anti-China rhetoric is largely about the election, but State’s broader push to strengthen the Quad, tighten relations with Taiwan, heighten attention on the South China Sea and more, are being driven as much by the policy professionals as the politicians.”

The US’s proximity with the Asian nations hasn’t gone down well with China, as Chinese foreign ministry spokesman Zhao Lijian on October 23 said that the US was bullying countries to pick sides over their links to China.

Similarly, in Sri Lanka, which a US Secretary of State will be visiting for the first time in a decade. He is likely to advise the Sri Lankan government to have least dependence on China which has invested billions of dollars in Sri Lanka, an important part of Beijing’s Belt and Road Initiative.

In Maldives, Pompeo will also advise the Maldivian government to decrease dependence on a country which is likely to become a hegemon in the Asian region.

Pompeo will visit Indonesia in the last leg of his tour. Indonesia is also facing China’s wrath as it is claiming its territory in the South China Sea. The claim is opposed by many states in the region, including Indonesia, the report said.

Washington asked Indonesia in July and August to grant landing and refuelling rights to its P-8 surveillance planes, which monitor Chinese military activity in the resource-rich waterway, the report said.

China is also irritated with increasing proximity between the US and Taiwan. The US sold weapons worth US $1.8 billion to Taiwan.

Pompeo in a statement this week said, “There are commercial issues, security issues and diplomatic issues where the US has already improved the relationship between the countries.”