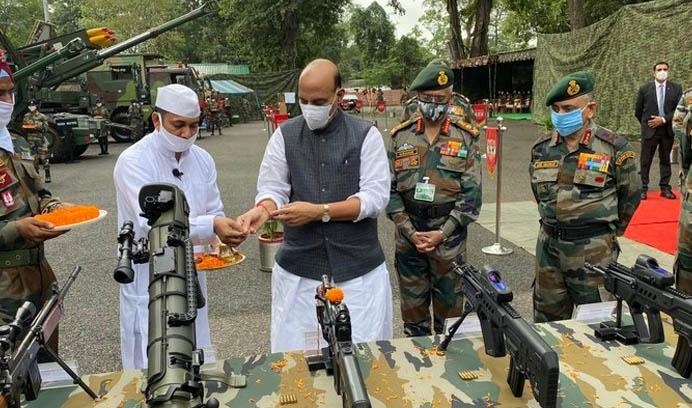 In the midst of a bitter stand-off with China, Defence Minister Rajnath Singh on Sunday performed ‘Shastra Puja’ on the occasion of Dussehra with Indian Army jawans in Sikkim. During this occasion, Army Chief General MM Narwane was also present there.

“India wants the Indo-China border tension to end and peace preserved. Also, I am confident that our army will not let anyone take even an inch of our land,” the Defence Minister said while talking to media persons after performing ‘Shastra Puja’.

Rajnath Singh’s comment came a day after he reviewed the combat preparedness of the Indian Army at the Sukna-based headquarters of its 33 Corps which is responsible for guarding the Line of Actual Control (LAC) with China in the Sikkim sector. He also inaugurated the Border Roads Organisation built Gangtok-Nathula Road alternate alignment via video conferencing in Sukna.

On Saturday, the defence minister arrived at the key military base, known as ‘Trishakti’ Corps, in Darjeeling district as part of his two-day visit to West Bengal and Sikkim to review the military preparedness in view of the border row with China in eastern Ladakh as well as to celebrate Dussehra with soldiers. Since early May this year, India and China have been facing tension on the Line of Actual Control.

China has deployed more than 50,000 troops in eastern Ladakh and to counter it, India has also deployed an equal number of troops on the border.

On October 12, senior commanders of the two countries held 7th rounds of talks in Chushul. Despite more than 11 hours of talks between the two sides, no breakthrough could be arrived at.