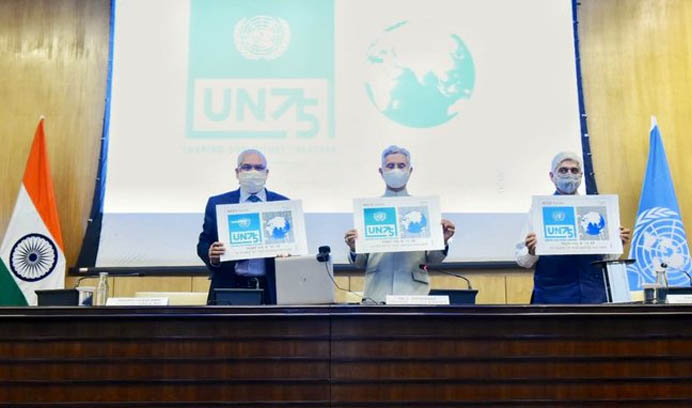 As a founder of the UN, India is today at the forefront of peace keeping operation across the world

External Affairs Minister S Jaishankar on Friday complimented the Department of Posts, while releasing a commemorative postage stamp on the 75th anniversary of the UN.

“I congratulate the Department of Posts, the Ministry of Communications, for their opportune initiative and as always, for ensuring the impeccable aesthetics in the design. Today’s initiative is also special and a befitting tribute, as it comes on the eve of the 75th anniversary of the founding day of the UN,” EAM Jaishankar said.

He said as India looks forward to beginning of its eighth term as a non-permanent member of the Security Council, beginning January 2021; it is important that at this historic juncture of the 75-year long journey of the UN, “we recommit ourselves to join hands and work with vigour and dedication to bring the goals and objectives of the UN closer to the aspirations of its member states, and more importantly to the aspirations of their peoples,” the EAM said.

He said, “The 75th anniversary is a significant milestone for the world’s biggest, and by far, the most crucial deliberative organisation. In the last 75 years, the United Nations has served as a platform for the nations of the world to come together under one roof and dream and work together towards a better future for humankind.”

As a founding member of the United Nations, India is invested with its heart and soul right from the crafting of the principles of the UN Charter to being in the forefront of keeping its peace, he added.

The EAM maintained that the Prime Minister rightly emphasised during his address to the UN’s special meeting to commemorate the 75th anniversary recently, and I quote, “Our world today is a better place because of the United Nations. We pay tribute to all those who have advanced the cause of peace and development under the UN flag, including in UN peacekeeping missions, where India had been a leading contributor.”

The Department of Post has been a salient record-keeper of India’s engagement with the UN, with their carefully curated stamps on various occasions in the past as well, including on UN’s 9th, 40th and 50th anniversaries.

In 2016, it released the ‘He or She’ series of stamps, highlighting solidarity for gender equality. The United Nations Postal Administration have also released stamps on themes that now resonate beyond India and Indians – such as the International Day of Non-Violence in 2009, the International Day of Yoga in 2017, Deepawali Stamps in 2018, as well as for Mahatma Gandhi’s 150th Birth Anniversary Stamp which was released last year.