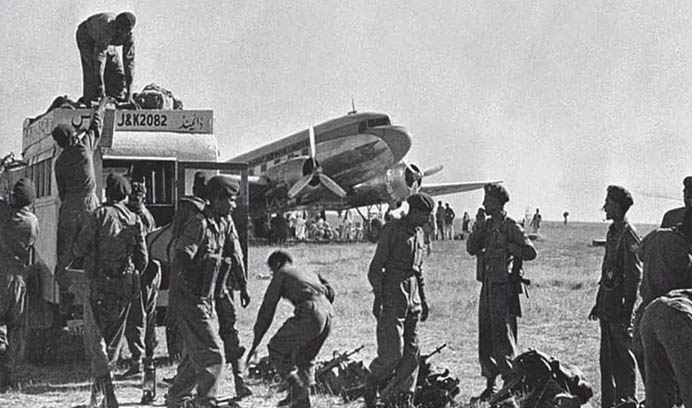 The month of October, it seems, has an uncanny relationship with Kashmir. It was on October 26, 1947 that Maharaja Hari Singh of Jammu and Kashmir signed the Instrument of Accession, to become an integral part of India. And, it was on October 31, 2019, that a new chapter in the growth and development for the people of Jammu and Kashmir, commenced with the abrogation of the stifling Article 370 and reorganisation of the State into two Union Territories. A long, arduous and laboured seven and half decades, for this fundamental change to happen.

And now when it is at the threshold of ascension to its rightful glory, it would be appropriate to recall the tumultuous events and ‘trials and tribulations’ of the people of this region, that preceded the union of the erstwhile princely State of Jammu and Kashmir with India.

The First Anglo Sikh War in 1845, led to the defeat of the Sikh Darbar by the British East India Company and signing of the ‘Treaty of Lahore’, on March 9, 1846. Maharaja Dalip Singh, the ruler of the Sikh empire, through one of the clauses of the agreement accepted Gulab Singh as an independent sovereign. A week later, on March 16, 1846, with the signing of the Second Treaty of Amritsar, between the British East India company and Maharaja Gulab Singh, the founder of the royal Dogra dynasty, laid the foundation for the princely state of Jammu and Kashmir. Gulab Singh paid 7.5 million ‘Nanakshahi’ rupees and bought the Kashmir Valley and, for the first time, politically united the three cultural zones of Jammu, Kashmir and Ladakh.

A century later, the State was again at the crossroads of history, when the Paramountcy of the British crown ended, over the princely States of the Indian sub-continent. On August 15, 1947, India and Pakistan were to become independent nations and the princely kingdoms were at liberty to join either or sign a ‘standstill agreement’. The ‘standstill agreement’ gave time to the ruler to decide the future of his princely kingdom, while legally protecting the administrative arrangements that existed with the outgoing British India government. The Government of India declared that it considered the States free to join either of the two countries and not remain independent, whereas Pakistan did not legislate anything.

On August 12, 1947, Maharaja Hari Singh exercised the option of a ‘standstill agreement’. Pakistan accepted the offer, India, however refused to sign the agreement, pending further discussions. Thereafter, events that unfolded were an outcome of insidious and diabolical plans orchestrated by Pakistan, with the covert support of the British establishment, by exploiting the complexities of Jammu and Kashmir.

Jammu and Kashmir was a Hindu kingdom with a large Muslim population that was in communal balance. However, there had been protests periodically for reforms, led by a strong and prominent Muslim leader, Sheikh Abdullah. Just before the exit of the British, the Maharaja was facing anti-establishment uprisings in parts of the State, resulting in the use of his State Forces to quell the unrest and that also led to the arrest of Sheikh Abdullah. The personal political ambitions of the Sheikh and proximity to Indian Prime Minister Jawaharlal Nehru, coupled with the diffidence of Maharaja Hari Singh to accede to either of the two countries and be independent, precipitated Pakistan to take unilateral action. It was no secret that both India and Pakistan were keen to assimilate Jammu and Kashmir into their respective territories.

The events leading to the Independence of India and Pakistan ushered in a hideous wave of communal rioting in the whole of Punjab, resulting in millions of refugees on both sides of the new borders. Jammu and Kashmir at first remained a haven for the victims of either side and maintained their traditional communal harmony and brotherhood, but could not remain immune to the horrifying stories of atrocities from both sides. It not only incited the sentiments of the co- religionists within the State, but also led to communal flare ups.

The action by the State Forces to maintain law and order in the State was communally coloured by local Muslim leaders of Pakistan, as ‘Hindu excesses’. This led to raids on the deployed detachments /posts of Jammu and Kashmir State Forces and Hindu settlements, along the undeveloped and undulating western borders of the State. Simultaneously, to put pressure on the Maharaja to accede in its favour, Pakistan imposed an unofficial economic blockade on the food and civil supplies to the Kashmir valley, as the traditional supply line for goods was through Pakistan. While complaints and counter complaints were levelled between officials of Jammu and Kashmir and Pakistan, attacks on the western periphery of Jammu and Kashmir continued under the garb of spontaneous tribal reaction to on-going communal clashes in Punjab.

This strategy of Pakistan backfired as Maharaja Hari Singh, to stem further disharmony in the State, released Sheikh Abdullah from custody, who was a strong voice against communalism. His statement to counter Jinnah’s claims on Jammu and Kashmir, encapsulates the sentiments of the large majority towards Pakistan at that time. He said, “How can Jinnah or the Muslim League tell us to accede to Pakistan? They have always opposed us in every struggle. Even in our present struggle, he carried on propaganda against us and went on saying that there is no struggle of any kind in the State. He even called us goondas.” As animosity increased towards Pakistan, it decided to seize Kashmir by force, while using Sardar Ibrahim Khan of Poonch to establish an “Azad Kashmir” government in Rawalpindi.

Blinkers were downed by Pakistan on October 22, 1947, as it launched a planned offensive called “Operation Gulmarg” into the State of Jammu and Kashmir. It used thousands of tribal from NWFP (also called ‘razakars’), equipped with modern weapons and transport, led by regular military personnel and in direct control of the Pakistan Military. The promise of greener pastures to the poor tribal and call for a ‘Holy War’ to liberate Jammu and Kashmir from the infidels, achieved the twin aim of diverting their brewing revolt and clamour for Pathanistan and provided the right cover to forcefully secure the princely State of Jammu and Kashmir.

According to the Pakistani plan, the military and civil administration were mobilised to ensure that every Pathan tribe should enlist at least one Lashkar of a 1000 tribesmen. Their leadership down to the smallest unit of the Lashkar, was to be ordered by the Pakistan Army, dressed up as Pathans. The entire Force was to be commanded by Maj Gen Akbar Khan, codename ‘Tariq’. The Lashkars were to be concentrated suitably in depth areas, by 18 October. The plan was to move at least six Lashkars on the road axis Muzaffarabad to Srinagar via Domel and two Lashkars from the North and nearly 10 Lashkars towards Poonch.

The large force on the designated date marched into Muzaffarabad on buses and foot, on their way to Srinagar. Uri was captured and the raiders reached Baramulla by October 24. The State Forces under command of Brig Rajender Singh on the Muzaffarabad axis, fought heroically and made the enemy pay dearly, before being inundated by sheer numbers. Baramulla finally capitulated on October 26 and then started the terrible story of plunder and rape. The scars of the atrocities still linger in the minds of the people of this rich and prosperous town. This rampage forced the Maharaja to ask India for military assistance, to stop the aggression.

In the success of the raiders lay their doom. In the savage excitement of satisfying their greed and lust, the barbaric raiders lost sight of their ultimate goal. Each man tried to grab the maximum and a large number of them turned back to securely deposit their treasures, disobeying the military leadership. The advance to Srinagar was thus held up for a few days and this proved crucial for the final outcome.

The Accession and Resistance

Events moved at breakneck speed on October 25, with a detailed review by India’s Defence Committee that met under the aegis of Lord Mountbatten and Prime Minister Nehru. It was a unanimous decision to support the princely state of Jammu and Kashmir with weapons and military equipment, on priority. However, to send in the Indian Army to redress the adversity, it would be necessary for the Maharaja to accede to India. After intense deliberations the ‘Instrument of Accession’ was executed by the ruler of the princely state of Jammu and Kashmir, Maharaja Hari Singh, on October 26, 1947.

The first Indian Army soldiers arrived in Srinagar on October 27, airlifted to repel the tribal invasion. The rest is, of course, a history of valour, raw courage, tactical innovativeness and sterling leadership by the Indian Army, written in blood on the ‘sands of time’ by Col Rai and his brave soldiers. The invaders advance was arrested outside Srinagar and then came the dogged and relentless military operations to regain the captured territory. However, when victory was on the horizon in 1948, a judgmental error led to the UN intervention and premature Cease Fire. We lost a portion of the Indian State and that is till date a ‘thorn in the flesh’.

It would, therefore, be appropriate today to remember all those who fell prey to the insidious machinations of Pakistan and the resultant ignominy suffered by the people of Jammu and Kashmir. Also, to rejoice the sacrifice of the valiant heroes of Kashmir who protected the under privileged. Let us now rally together for a brighter future for the people of this great land.

(The author is former Army Commander of the Indian Army)