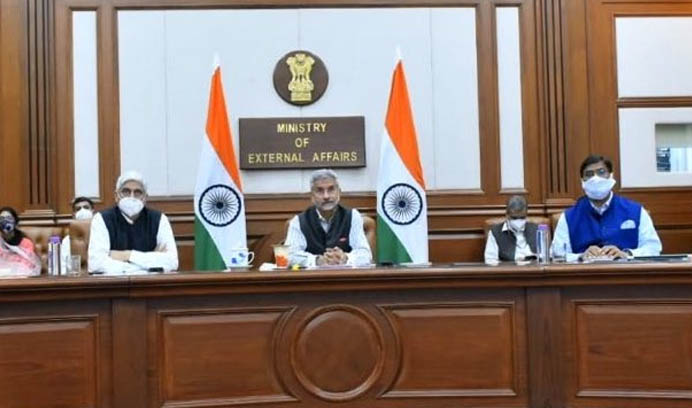 Bilateral relations between India and Morocco have acquired considerable depth and vitality in the last six years, including in areas like cyber security and counter terrorism

During the meet, the two sides agreed that the MOUs/ Agreements concluded in the last two years in the fields of cyber security, counter terrorism and space provide strong frameworks for building the foundation of a strong and comprehensive relationship.

They agreed that both sides should expedite the finalisation of the MOU on defence cooperation and the Cultural Exchange Programme so that these can be signed on an early date.

They discussed respective national approaches to deal with the challenges of the Covid-19 pandemic. The EAM thanked Bourita for the Moroccan government’s support for the repatriation of Indian nationals stranded in Morocco due to the suspension of international flights in the wake of the pandemic.

During the meeting, both sides agreed that bilateral relations have acquired considerable depth and vitality following the landmark visit of His Majesty Mohammed VI, the King of Morocco in October 2015 for the third India-Africa Forum Summit.

Exchange of 23 Ministerial visits and conclusion of over 40 MoUs and agreements in a range of sectors such as IT, education, culture, agriculture, mutual legal assistance, extradition, since then are a testament to the strong desire on the part of both sides to take bilateral ties to a higher plane.

The EAM conveyed India’s commendation for the Moroccan king’s visionary leadership in steering his country on the path of economic progress and prosperity.

While assessing the growth in trade and investment relations, the two ministers noted, in particular, the close cooperation in fertilizers, textiles, pharmaceuticals, automobiles and ICT sectors.

Bourita, in turn, conveyed his government’s appreciation for India’s facilitation of commercial exports of medicines during this critical time.

The two Ministers had an in-depth exchange of views on regional and global issues, including the UN reforms, international fight against terrorism, climate change, renewable energy and cooperation under the India Africa Forum Summit (IAFS) mechanism.

Responding to Bourita’s briefing on the developments in Libya, including at the recent intra-Libyan dialogue in Bouznika, EAM commended Morocco’s resolute and constructive engagement with all the Libyan parties since the beginning of the crisis, and its contribution to the UN efforts aimed at finding a peaceful resolution through a Libyan-led and Libyan-owned political process, taking into account the legitimate aspirations of the Libyan people while preserving the country’s sovereignty, unity and territorial integrity.

The Moroccan Foreign Minister congratulated India on its election to the non-permanent seat of the UNSC for the term 2021-2022 and also conveyed his government’s support for India’s permanent membership in an extended United Nations Security Council.

Both sides expressed satisfaction at the ongoing close coordination between the two countries at various international organizations, including the United Nations.

The EAM expressed India’s support to the efforts of the United Nations Secretary General aimed at achieving a realistic, lasting, mutually negotiated and acceptable political solution to the Sahara issue and noted the efforts of the Kingdom of Morocco in this direction.

The EAM reiterated his invitation to Bourita to visit India when the situation permits, which was accepted with pleasure by the Moroccan Foreign Minister.