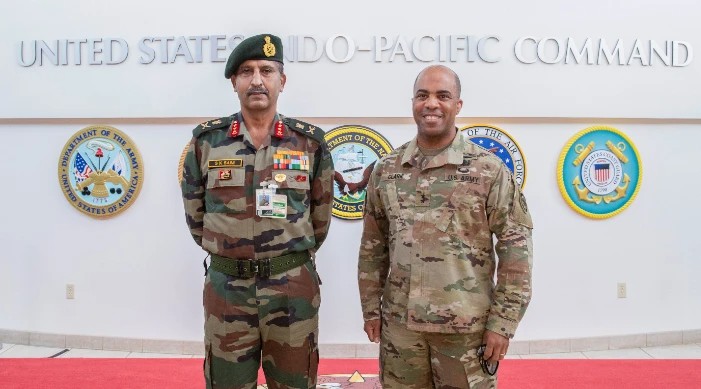 Lt Gen. Saini is on a three-day visit to the US command to increase military cooperation

Ahead of the India-US 2+2 talks, scheduled later this month, Vice Chief of the Army Staff Lt General Satinder K Saini met with Major General Ronald P Clark, Chief of Staff of US Indo-Pacific Command, and discussed the US and Indian partnership in the Indo-Pacific region.

“Vice Chief of Army Staff Lt. Gen. S K Saini visits to build trust and interoperability between the U.S.-and Indian Army. The U.S.-India Army-to-Army relationship is strong and opportunities exist for increased cooperation,” the US Army Pacific said in a tweet.


The two-plus-two dialogue between India and the US is expected to take place on October 26 and 27 in India during which both sides are likely to carry out a comprehensive review of their strategic cooperation.

On the bilateral front, a key takeaway at the 26-27 “2+2" talks is expected to be the signing of the Basic Exchange and Cooperation Agreement (BECA) that will allow the US to share satellite and other sensor data with India to improve the Indian military’s targeting and navigation capabilities.

Besides, one of the top agendas of the “2+2" talks is to together meet the challenge posed by a rising China. Recently, at a Quad group meeting in Tokyo, the US called out China’s belligerence in the region but the other three countries India, the US, Japan, and Australia did not mention Beijing by name though they all expressed concerns over China’s aggressive actions along its periphery and beyond.

Talking about the Indo-Pacific region, Begin had said, “Any country that seeks a free and open Indo-Pacific and is willing to take steps to ensure that should be welcome to work with us.”

The upcoming two-plus-two dialogue is the third edition after the second edition of the dialogue held in Washington in December last year. The first edition of the two plus two talks was held in 2018.