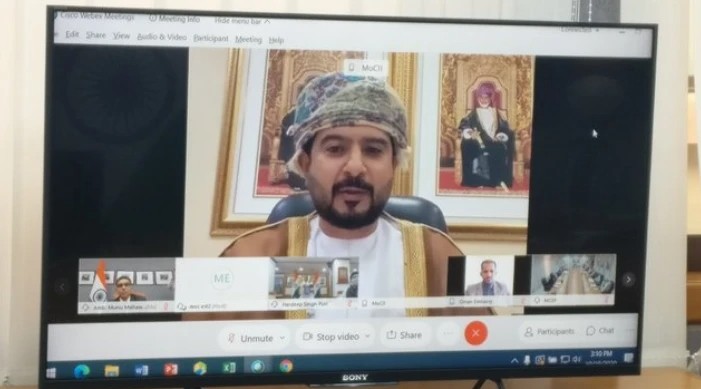 In order to further enhance the ongoing bilateral relationship between India and Oman, the 9th India-Oman Joint Commission Meeting was held on Monday through video conferencing. The two nations discussed various sectors in which the opportunities can be further explored including aviation, health, renewable energy among others.

The meeting was co-chaired by Minister of State for Commerce and Industry, Hardeep Singh Puri and Omani Minister of Commerce, Industry and Investment Promotion, Qais bin Mohammed Al Yousef.

Both sides discussed ways of cooperation between the two countries in various sectors of the economy including civil aviation, renewable energy, IT & health sector, Minister of State for Commerce and Industry, Hardeep Singh Puri said in a tweet.


Co-chaired the 9th India-Oman Joint Committee Meeting along with HE Qais bin Mohammed al Yousef, @Qais_AY. We discussed ways of cooperation between the two countries in various sectors of the economy including civil aviation, renewable energy, IT & health sector. pic.twitter.com/8CRMrKXN2D


He further said, “Economic & commercial relations between India & Oman are robust & buoyant. We further deliberated on strengthening our bilateral ties through diversification of the trade basket & cooperation on the economic front.”


Economic & commercial relations between India & Oman are robust & buoyant. We further deliberated on strengthening our bilateral ties through diversification of the trade basket & cooperation on the economic front.


The Omani leadership expressed satisfaction over bilateral engagement between the two sides, saying that Oman is currently witnessing ‘remarkable economic cooperation with the Indian side’.

In a statement, the Omani Ministry of Commerce, Industry and Investment Promotion said, “The Sultanate is witnessing remarkable economic cooperation with the Indian side. There is a growth in Omani exports to India by 0.69 per cent. As the volume of trade exchange between the Sultanate and India amounted to more than OMR 5.93 billion. Likewise, Indian exports to the Sultanate increased by 33 per cent in 2019.”

The recent meeting between the two can be seen as a step towards the ongoing efforts by the Indian government to increase bilateral relationships with the countries in the Gulf and Arab region.

In a seminar held recently, the Ministry of External Affairs' secretary, Sanjay Bhattacharyya said at a recent event that India and the Arab countries have many opportunities to explore in the sectors such as human resource exchange, technology and economy.

At the LEADS 2020 FICCI Seminar held last week, Bhattacharyya said that the trade between India and the West Asian region can be extended to goods beyond hydrocarbons. The countries can include engineering goods, gems and jewellery, precious metals, food products, textiles and chemicals in their trade basket, he said. Such products “in our exports and new products in our imports can give impetus to our trade relations,” he said.

The relationship between India and the Arab world has seen a steady rise in the past few years with India emerging as one of the important nations in this respect.

In fact, in a recent statement by Israeli Ambassador to India, Ron Malka said that there is a possibility of a ‘Trilateral Bloc’ in West Asia comprising India, Israel and the United Arab Emirates as partners at a time when Israel has entered a ‘peace deal’ with the UAE and Bahrain.

He also said that India can bridge the gap between Israel and other West Asian countries as it has cordial relationships with almost all of them including Palestine.

With Israel, From US$ 200 million in 1992 comprising primarily trade in diamonds, bilateral merchandise trade stood at US$ 5.65 billion excluding defence in 2018-19, the MEA data suggested. India is also Israel's third largest trade partner in Asia and seventh largest globally.

India has also established relations with Kuwait. India even held a national day of mourning on October 4 to remember former Emir Sheikh Sabah Al-Sabah, who died at the age of 91 on September 29. India is moving closer to boost existing relationships with the oil rich country.

Similarly, with the UAE, India has moved ahead in the bilateral economic partnerships. According to the data by the Ministry of External Affairs, the annual trade which was around US$180 million in the 1970s climbed up to US$60 billion in 2018-19 making the UAE India’s third largest trading partner. The UAE became the second largest importer of Indian products with US$30 billion in 2018-19.

With US$36 billion of non-oil trade, it became the third largest trading partner of India, according to the government data. Indian investments in the UAE were estimated at around $85 billion. Apart from that, the UAE also invested in India’s Petroleum sector in South India.

The nations have also helped India establish its links with the countries in the Organisation of Islamic Cooperation (OIC). As far as OIC is concerned, Saudi Arabia and the UAE blocked Pakistan’s bid to embarrass India on Kashmir’s issue during the OIC meeting held in March this year.

As far as trade is concerned, Saudi Arabia happens to be one of the biggest trade partners of India. According to the Ministry of External Affairs’ (MEA) data, Saudi Arabia is India’s fourth largest trade partner and is a major source of energy as India imports around 18 percent of its crude oil requirement from the Kingdom.