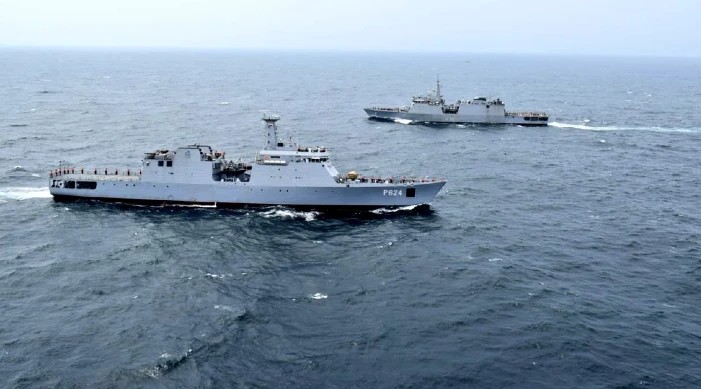 Three-day India-Sri Lanka annual maritime exercise SLINEX begins on Monday. This is the eighth edition of the bilateral exercise between the two countries and it will go on till October 21 in the Bay of Bengal.

During the exercise, the Indian Navy will showcase the indigenously built ASW corvettes Kamorta and Kiltan under the command of Rear Admiral Sanjay Vatsayan, Flag Officer Commanding Eastern Fleet while the Sri Lankan Navy will be represented by SLN Ships Sayura and Gajabahu led by Rear Admiral Bandara Jayathilaka, the Flag Officer Commanding Naval Fleet of the Sri Lankan Navy.

India will also be displaying Advanced Light Helicopter (ALH) and Chetak Helicopter embarked onboard IN ships, and Dornier Maritime Patrol Aircraft will also be participating in the exercise.

SLINEX-2020 holds great importance at a time when India has been making efforts to become self-reliant in terms of the manufacturing of defence equipment under the ‘Atmanirbhar Bharat Abhiyan.’ The joint exercise will showcase the capabilities of India’s indigenously constructed naval ships and aircrafts taking ahead the mission.

The bilateral naval exercise also focuses on enhancing interoperability and improving mutual understanding between the countries. It will also enable the countries to exchange best practices and procedures for multi-faceted maritime operations.

The exercises will include surface and anti-air exercises such as weapon firing, seamanship evolutions, manoeuvres and cross deck flying operations. The exercises are likely to enhance the high degree of interoperability already established between the two friendly navies.

According to a statement by the Ministry of Defence, the previous editions of SLINEX have resulted in a deep engagement between the two nations and have further improved the cooperation in maritime operations.

“Interaction between the SLN and IN has also grown significantly in recent years, in consonance with India’s policy of ‘Neighbourhood First’ and Hon’ble PM’s vision of ‘Security and Growth for all in the Region (SAGAR),’” the statement said.

An example of the same was seen in September when the navies of both nations worked closely to douse the fire on Crude oil carrier MT New Diamond which caught fire off the East Coast of Sri Lanka.

This year, the exercise will be held in a non-contact ‘at-sea-only’ format in the backdrop of COVID-19 pandemic. Last year, it was held off Vishakhapatnam in September.

The SLINEX-2020 will be the second such joint naval exercise of India with another nation this month with the first one being on October 3 with Bangladesh.

India on October 3 began the second edition of Indian Navy– Bangladesh Navy bilateral exercise Bongosagar which was aimed at developing interoperability and joint operational skills through the maritime exercises.

The joint naval exercise was followed by the 3rd edition of Indian Navy-Bangladesh Navy’s Coordinated Patrol (CORPAT) in Northern Bay of Bengal held between October 4 and October 5. India and Bangladesh under CORPAT undertook joint patrolling along the International Maritime Boundary Line (IMBL).

The 11th edition of the biennial India-Russia joint exercise INDRA NAVY was held between September 4 and September 5. Due to restrictions by COVID-19, the exercise was held in a ‘non-contact at sea’ format. It happened as Defence Minister Rajnath Singh attended the Shanghai Cooperation Organisation (SCO) meet.

The exercise happened despite the fact that India refused to take part in Kavkaz-2020, a multinational joint military exercise as the armies of China and Pakistan also participated in the exercise, although, the official reason was given as the deteriorating situation of COVID-19.

Indian Navy also held joint military exercises with Australia as the Passage Exercise or PASSEX happened between September 23 and September 24 in the Indian Ocean.

It was followed by the 4th edition of India-Japan Maritime bilateral biennial exercise JIMEX in the North Arabian Sea between September 26 and September 28. The maritime exercise opened the doors for the governments of both nations to work closely towards common goals in the defence sector.

Not just that, India held joint naval exercises with the United States earlier this year.

Now India, facing hostility from China and Pakistan, is making all the efforts to enhance its bilateral cooperation in the Asian Pacific region and prove dominance in the Indian Ocean.

Indian ocean touches regions from west Asia to Africa to Pacific. It touches Iran, Pakistan, India and Bangladesh, Philippines, Indonesia, Australia and Africa. It happens to be an important sea route for trade for the countries in the Western world as well.

These joint naval exercises are the steps towards India’s increasing cooperation with the countries in the region.