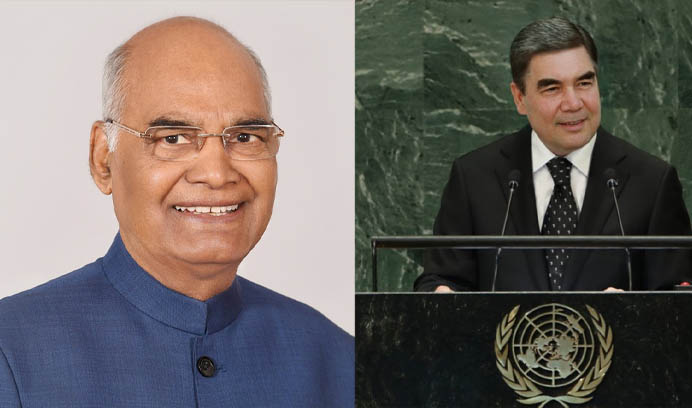 President Ram Nath Kovind held a telephonic conversation with the President of Turkmenistan, Gurbanguly Berdimuhamedov on Wednesday and cheered the bilateral relationship between the two nations.

President Kovind informed about the same, on Twitter. He wrote, “I thank the President of Turkmenistan Gurbanguly Berdimuhamedov for his telephone call this morning. Appreciate the sustained momentum in our bilateral partnership that is reflective of our shared historical and civilizational links.”

I thank the President of Turkmenistan Gurbanguly Berdimuhamedov for his telephone call this morning. Appreciate the sustained momentum in our bilateral partnership that is reflective of our shared historical and civilizational links.

The Ministry of External Affairs (MEA) later released a statement about the same.

“The leaders acknowledged the warm and cordial relations between the two countries underpinned by historical and civilizational links. They noted with satisfaction the sustained momentum of cooperation in diverse areas,” the statement said.

According to MEA data, the relationship between India and Turkmenistan dates back to the 17th century and ‘Turkmen Gate’ built in Delhi in 1650s bears testimony to this friendship.

The presidents of both nations identified the immense potential that exists in trade and economic spheres, the statement said. The leaders also noted the success of joint collaboration between the Indian and Turkmen companies especially those operating in the pharmaceutical sector, the statement said further.

It comes at a time when Turkmenistan is increasing its bilateral cooperation with India in sectors including oil and gas.

One example of such is the Turkmenistan-Afghanistan-Pakistan-India (TAPI) gas pipeline which began on December 11, 2010. The pipeline is being developed by TAPI Pipeline company limited along with the Asian Development Bank. The pipeline aims to transport natural gas from the Galkynysh Gas field in Turkmenistan to all other three countries.