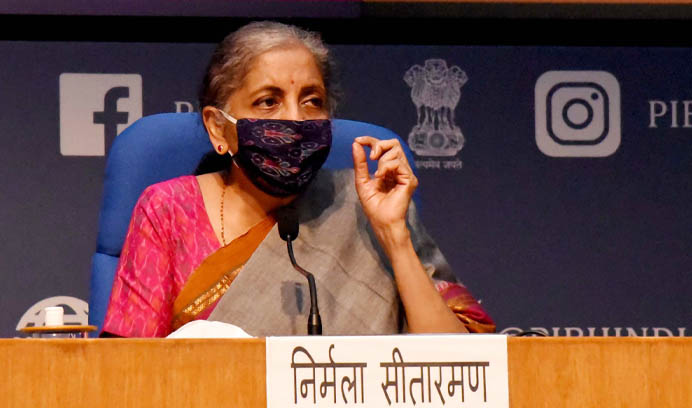 In a move to counter the economic slowdown because of the Covid-19 lockdown, Finance Minister Nirmala Sitharaman today announced a series of measures to stimulate consumer spending and boost capital expenditure amounting to nearly Rs 73,000 crore by March 31, 2021.

The measures include a Leave Travel Concession (LTC) Cash Voucher Scheme and a Special Festival Advance Scheme for government employees.

Giving details about the scheme, the Finance Minister said that government employees can opt to receive cash amounting to leave encashment, plus tax-free ticket fare as per entitlement.

An employee opting for the scheme will have to buy goods/services worth three times the fare and one time the leave encashment before March 31, 2021. They will have to buy items which attract a GST of 12 percent or more, from a GST registered vendor through digital mode.

In addition to central government employees, those from Public Sector Banks (PSBs) and Public Sector Enterprises (PSEs) can also opt for the scheme. The tax concession will be allowed for state government and private sectors too.

According to Sitharaman, this is expected to generate additional consumer demand of Rs 28,000 crore.

Addressing the media, Sitharaman announced a one-time interest-free festival advance of Rs 10,000 to all central government officers and employees as part of plans to increase consumer spending to spur demand in the economy.

Disbursal will be in the form of a RuPay card pre-loaded with the advance value. The advance, which is a one-time measure, can be availed on on the choice of festival of the employee, with the amount to paid back in a maximum 10 instalments.

“This is expected to generate at least about Rs 8,000 crore of demand,” she said.

The interest-free loans announced for states have been divided into two parts. Part 1 includes Rs 200 crore each for eight North East states (total Rs 1,600 crore) and Rs 450 crore each for Uttarakhand and Himachal Pradesh (total Rs 900 crore). Part 2 covers Rs 7,500 crore for all the remaining states.

Both Part 1 and Part 2 are to be spent by March 31, 2021. Of this, 50 percent will be given initially, remaining upon utilization of first 50 percent, the Finance minister noted.

Under Part 3 of the ₹ 12,000 crore interest-free loans to states, ₹ 2,000 crore will be given to those states which fulfill at least 3 out of 4 reforms spelled out in AatmaNirbhar Bharat package, she noted.

The Finance Minister noted that the Rs 12,000 crore loan is over and above the borrowing ceilings of the states and the repayment will be one bullet payment after 50 years.

Besides, an additional budget of Rs 25,000 crore is being provided for capital expenditure on roads, defence, water supply, urban development and domestically produced capital equipment.

While announcing the package, the Finance minister assured that the economic revival is foreseen amid the Covid-19 pandemic.

“I have been speaking with industry leaders directly who say we reached pre-COVID capacity utilisation. So revival is clearly visible,” she said.