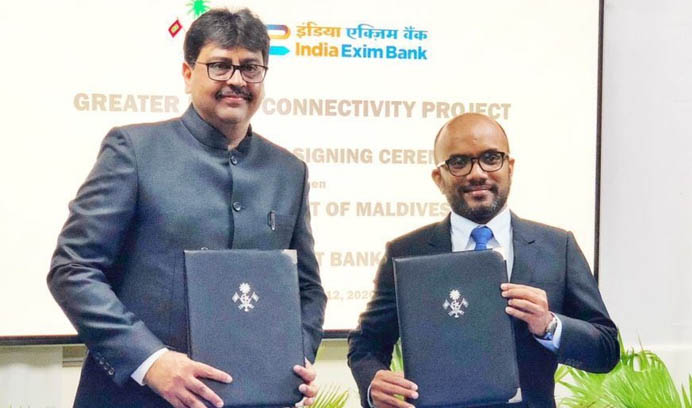 The funding will be used for the single largest connectivity and infrastructure project in the Maldives.

The EXIM Bank of India on Monday signed a US $400 million Line of Credit agreement with the Maldives Ministry of Finance for funding the Greater Male’ connectivity project.

Thanking India for partnering with the Maldives for the project, the island country’s Foreign Minister Abdulla Shahid tweeted, “The Greater Male Connectivity Project will lead to greater possibilities. It is the gateway to a more developed & economically resilient nation. Thank you for partnering with Maldives in delivering this project with a $100 million of grant and $400 million Line of Credit.”

The Greater Malé Connectivity Project will lead to greater possibilities. It is the gateway to a more developed &economically resilient nation.

Thank you for partnering with the in delivering this Project with $100 million of grant and $400 million Line of Credit. pic.twitter.com/DfhNW3lpxw

India’s support for the project was announced during the virtual meeting between External Affairs Minister Dr S Jaishankar and Foreign Minister Abdulla Shahid on August 13.

Providing more details on the project, the press release issued by the Indian High Commission said that the project is a 6.7 km bridge and causeway network connecting Male, Villingili, Gulhifalhu and Thilafushi.

The project will be an economic engine and lifeline connecting Hulhumale, Hulhule and Male with the proposed Gulhifalhu Port and the Thilafushi Industrial Zone.

The scheme is composed of three navigation bridges of 140 m main span across the deep channel between each island, 1.41 km of marine viaduct in deep water, 2.32 km marine viaduct in shallow water or on land, and 2.96 km of at-grade roads.

The land interchanges at Male and Villingili will be signalised junctions, while there will be roundabouts at Gulhifalhu and Thilafushi. Bus terminals are planned on each island near the junctions with the mainline.

To use renewable energy as a sustainable measure in infrastructure, solar power will be used for road lighting, navigation lighting, deck cell lighting, CCTV and lighting on sign gantry and architectural lighting. Solar panels will be installed on top of the lamp posts and along discrete lengths of the bridge parapets.

The EXIM bank is also holding discussions with other Maldivian Ministries and agencies – Ministry of Economic Development, Ministry of Planning, Infrastructure and Housing, Ministry of Foreign Affairs and the Hulhumale Development Corporation (HDC) – involved in the implementation of the Line of Credit projects.

The discussions will assess the progress on the implementation of seven other mega infrastructure projects funded under US$ 800-million Line of Credit provided to Male earlier.

These several projects include: i. Development of an international port at Gulhifalhu; ii. Establishment of water supply and sewerage networks across 34 islands spanning 16 atolls; iii. Development of roads and storm water drainage along with reclamation works in Addu atoll in southern Maldives; iv. Establishment of a Cancer Hospital in Hulhumale; v. Expansion of the Hanimaadhoo Airport in northern Maldives; vi. Construction of a Cricket Stadium in Hulhumale; vii. Expansion of facilities for the Maldives Industrial Fisheries Company.