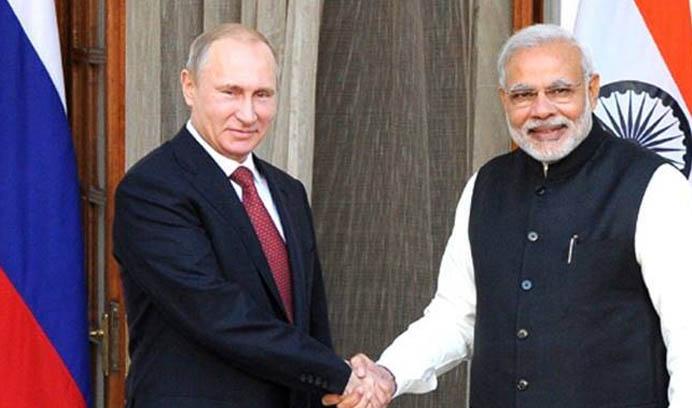 "Our leaders have spoken on the telephone including President Putin had spoken to Prime Minister Modi on his birthday. And both leaders agreed that they will have the bilateral summit in India as soon as the sanitary situation permits. There is no confirmed date as yet," Indian Ambassador to Russia Bala Venkatesh Varma was quoted by a Russian news agency Tass as saying.

In July, Prime Minister Modi had a telephonic conversation with President Putin and during that talk both had agreed to meet at an India-Russia summit scheduled to take place in India this year. He also congratulated President Putin on the success of celebrations marking the 75th anniversary of the victory in the Second World War and for the successful completion of the vote on constitutional amendments in Russia.

“Prime Minister Shri @narendramodi had a telephone conversation with HE President Vladimir Putin of the Russian Federation today,” the embassy had tweeted in July.

India and Russia have stood by each other even before the time India achieved independence. Relations between both sides are rooted in history, mutual trust, and mutually beneficial cooperation. This is a strategic partnership that has withstood the test of time, and which enjoys the support of the people of both countries.

On Friday, the first-ever India-Russia webinar on the use of natural gas as a motor fuel was organized under the aegis of the Ministry of Petroleum and Natural Gas, Government of India, and the Ministry of Energy of the Russian Federation.

“Ambassador delivered the welcome address at the first ever #India - #Russia Webinar on Use of #NaturalGas as motor fuel. Shri Tarun Kapoor (Secy,@PetroleumMin) and HE Mr Anton Inyustyn (Russian Dy Minister for Energy) participated,” the official handle of the Embassy of India in Russia tweeted.

Ambassador delivered the welcome address at the first ever #India-#Russia Webinar on Use of #NaturalGas as motor fuel.
Shri Tarun Kapoor (Secy, @PetroleumMin) and HE Mr Anton Inyustyn (Russian Dy Minister for Energy) participated.

In line with the Covid-19 pandemic, India and Russia have supported each other. Russia has recently announced that it will send 100 million doses of its highly touted Covid-19 pandemic once the final steps get completed.

In September, both Defense Minister Rajnath Singh and External Affairs Minister S Jaishankar had visited Moscow and met their Russian counterparts. The Defence Minister had thanked Russia for their timely response to the requests for the procurement of particular weapon systems in the country.