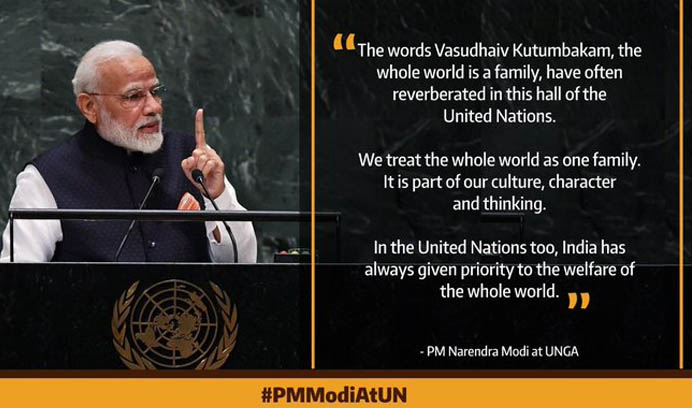 Addressing the 75th session of the UN General Assembly on Saturday evening, Prime Minister Narendra Modi made a bold pitch for the UN reforms

“People of India have been waiting for a long time to complete the process of reforms of the United Nations. They are worried whether this process will ever reach the logical end. After all, how long India will be kept out of the decision making structures of the United Nations,” Prime Minister Modi said.

“Reform in the responses, in the processes, in the character of the United Nations is the need of the hour,” the Prime Minister added.

He said the world of 1945 was significantly different from today’s world.

“The global situation, sources-resources, problems-solutions; all were quite different. And as a result the form and the composition of the institution, established with the aim of global welfare, were in accordance with the prevailing situation of those times. Today we are in a completely different era in the 21st century, the requirements and challenges of our present as well as our future are vastly different from those of the past,” he said.

Therefore, the international community today is faced with a very important question: Whether the character of the institution, constituted in the prevailing circumstances of 1945, is relevant even today?

“If century changes and we don’t, then strength to bring changes becomes weak. If we assess the last 75 years of the United Nations, we see several achievements. But at the same time, there are also several instances that point to a serious need for introspection for the United Nations. One could say that we have successfully avoided a third world war, but we cannot deny that there have been several wars and many civil wars. Several terrorist attacks shook the world and there have been bloodsheds. The people who lost their lives in these wars and attacks were human beings, like you and me,” he said.

Thousands of children, who would have otherwise enriched this world,” left us prematurely. So many people lost their life savings and became homeless refugees. Were the efforts of the United Nations sufficient during those times or are these efforts adequate even today? The whole world is fighting the global pandemic of Corona for the last 8-9 months. Where is the United Nations in this joint fight against the pandemic? Where is its effective response” he asked.

He reminded the international community about India’s impending role as a non-permanent member of the Security Council.

“From January next year, India will also fulfil its responsibility as a non-permanent member of the Security Council. I express my gratitude to all our fellow countries who have bestowed this trust upon India. We will use the prestige and experience of the largest democracy for the benefit of the whole world. Our path goes from human welfare to the welfare of the world,” the Prime Minister said.

“India will always speak in support of peace, security and prosperity. India will not hesitate in raising its voice against the enemies of humanity, human race and human values – terrorism, smuggling of illegal weapons, drugs and money-laundering. India’s cultural heritage, tradition, thousands of years of experience will always stand in good stead for the developing countries. India’s experiences, India’s developmental journey with its ups and downs will strengthen the way towards world welfare,” he added.

He further said the ideals on which the United Nations were founded are quite similar to that of India and not different from its own fundamental philosophy.

“The words ‘Vasudhaiv Kutumbakam’, the whole world is a family, have often reverberated in this hall of the United Nations. We treat the whole world as one family. It is part of our culture, character and thinking,” the Prime Minister said.

In the United Nations too, India has always given priority to the welfare of the whole world.

“India is the country, which sent its brave soldiers to about 50 peacekeeping missions. India is the country that has lost the maximum number of its brave soldiers in the course of establishing peace. Today every Indian, while seeing the contribution of India in the United Nations, aspires for India’s expanded role in the United Nations,” the Prime Minister said while drawing the attention of the world community towards India’s contributions in the world.

“Similarly, the Coalition for Disaster Resilient Infrastructure and the International Solar Alliance are realities today due to efforts of India. India has always thought about the interests of the whole humankind and not about its own vested interests. This philosophy has always been the driving force of India's policies,” the Prime Minister added.

“One can see the glimpses of this philosophy in India’s Neighbourhood First Policy to our Act East Policy, in the thought of Security and Growth for All in the Region, and in our approach towards the Indo Pacific region. India’s partnerships are also guided by this very principle. Any gesture of friendship by India towards one country is not against someone else. When India strengthens its development partnership, it is not with any malafide intent of making the partner country dependent or hapless. We have never hesitated from sharing experiences of our development,” the Prime Minister maintained.

Even during these very difficult times of a raging pandemic, he said, the pharma industry of India has sent essential medicines to more than 150 countries.

“As the largest vaccine producing country of the world, I want to give one more assurance to the global community today. India’s vaccine production and delivery capacity will be used to help all humanity in fighting this crisis. We are moving ahead with phase 3 clinical trials in India and in our neighbourhood. India will also help all the countries in enhancing their cold chain and storage capacities for the delivery of vaccines,” the Prime Minister said.

In the past few years, following the mantra of Reform-Perform-Transform, India has made great efforts to bring about transformation in the lives of millions of its citizens.

“We are moving forward with the vision of "Self-reliant India” in the changed circumstances of the post-Pandemic era. A self-reliant India will also be a force multiplier for the Global Economy. Today, it is also being ensured that there is no discrimination in extending the benefits of all the schemes to every citizen of the country,” he said.

“Large scale efforts are being made in India to promote women enterprise and leadership. Indian women, today, are the biggest beneficiaries of the largest Micro Financing Scheme of the world. India is one of those countries where women are provided Paid Maternity Leave of 26 weeks. The rights of transgender are also being secured through necessary Legal reform,” the Prime Minister said.