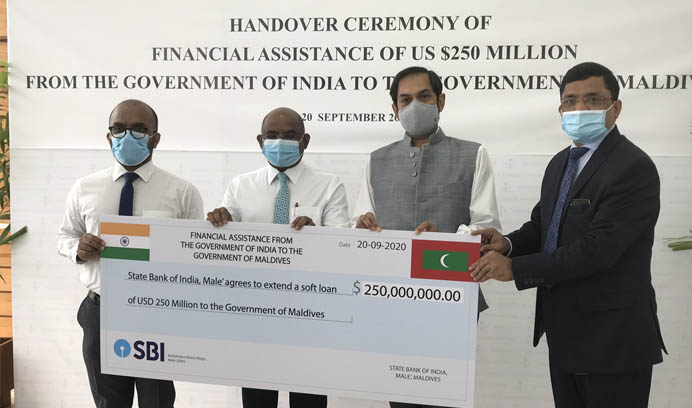 A glimpse of the ceremony held by Maldivian Ministry of Foreign Affairs. (Source: Twitter @HCIMaldives)

Welcoming the move, the Maldivian Ministry of Foreign Affairs said that It showcases India’s commitment to its ‘Neighbourhood First’ policy

Keeping its word of providing all possible help to its neighbours, India provided financial assistance of $250 million as budgetary support to Maldives to help the country mitigate the economic impact of the COVID-19 pandemic.

The Indian Embassy in Maldives wrote on its Twitter handle, “Walking the talk! USD 250 million assistance provided to by, as budgetary & revenue support for mitigating impact of the #COVID pandemic on Maldivian economy. Under this #SBI will subscribe to a Treasury Bond issued by Govt. of Maldives with a comfortable 10-yr tenor.” 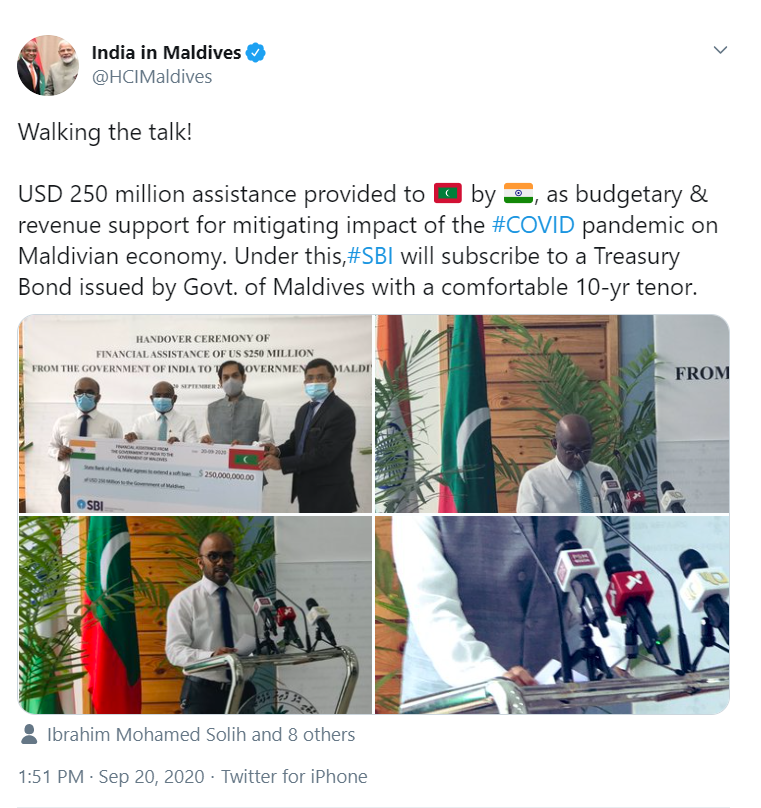 Welcoming the move, the Maldivian Ministry of Foreign Affairs said that It showcases India’s commitment to its ‘Neighbourhood First’ policy. It said, “The USD 250 million budgetary support showcases the resilience and reliability of the India-Maldives relationship. India’s Neighbourhood First policy and Maldives’ India First policy have worked in tandem during the COVID-19 pandemic to safeguard the well-being of our peoples.”

It said that it is another milestone in the historic ties between the countries that have expanded in scope and risen in ambition in the recent past.

The ministry held a ceremony to mark the occasion. The ceremony was attended by Foreign Minister Abdulla Shahid, Finance Minister Ibrahim Ameer, High Commissioner Sunjay Sudhir and CEO, SBI, Male Bharat Mishra. The Ministry posted the photos of the ceremony on its twitter handle. It wrote on twitter, “The Financial Assistance of $250 million from the Government of India to the Government of Maldives handed over.” 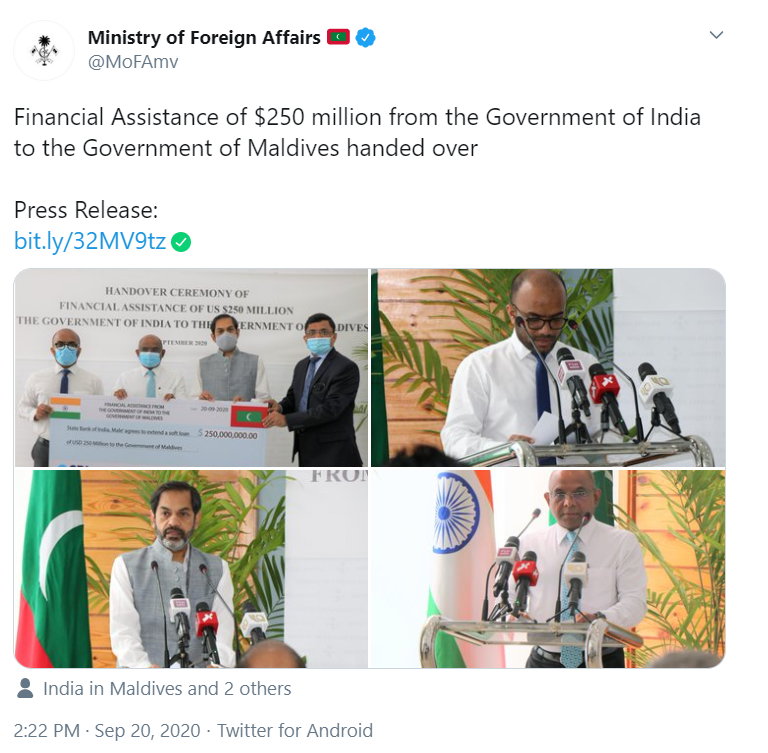 The payment has been made through a Treasury Bond sale to the State Bank of India (SBI), Male which has a tenure of 10 years for repayment. The Government of India has provided a sovereign guarantee to SBI for this financial assistance. The soft loan of USD 250 million has a comfortable tenor of 10 years and a very low interest rate.

The assistance had been announced during a virtual meeting between the External Affairs Minister (EAM) S Jaishankar and his Maldivian counterpart. The Indian Embassy later released a statement on the same.

It informed that the support is a response to the request made by Maldivian president Solih to Prime Minister Narendra Modi for assistance. “The USD 250 million budgetary support was a response to the request made by President Solih to PM Modi for financial assistance to overcome the difficult economic situation in the Maldives. It is being provided under the most favourable terms possible to the Government of Maldives,” the statement said.

According to the statement, this is not the first time that India has helped Maldives. It said that 500 Maldivians in 8 batches of Maldivian patients travelled to India in the past few weeks. The statement further said that India will also send doctors and nurses recruited on short-term contracts to reinforce the health system in the Maldives in the battle against COVID-19.