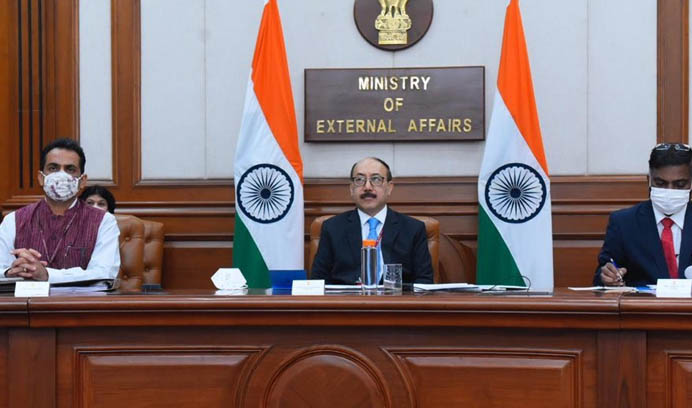 Holding their first official level trilateral dialogue in a virtual format, India, France and Australia on Wednesday discussed economic and geostrategic challenges and cooperation in the Indo-Pacific, particularly in the context of the COVID-19 pandemic and domestic responses to COVID-19.

At the trilateral dialogue while India was led by Foreign Secretary Harsh Vardhan Shringla, the French side was headed by Minister for Europe and Foreign Affairs Francois Delattre and the Australian side was led by Secretary, Department of Foreign Affairs and Trade Frances Adamson.
“Reaffirming our close partnerships in the Indo-Pacific region, FS Harsh Vardhan Shringla co-chaired the inaugural India-France-Australia Trilateral Dialogue today,” Ministry of External Affairs spokesperson Anurag Srivastava said in his tweet.

Cooperation on Marine Global Commons and potential areas for practical cooperation at the trilateral and regional level were also discussed, including through regional organisations such as ASEAN, IORA and the Indian Ocean Commission.

The three countries also had an exchange on the priorities, challenges and trends in regional and global multilateral institutions, including the best ways to strengthen and reform multilateralism.

According to the Ministry of External Affairs, the outcome oriented meeting was held with the objective of building on the strong bilateral relations that the three countries share with each other and synergising their respective strengths to ensure a peaceful, secure, prosperous and rules-based Indo-Pacific Region.

The three sides agreed to hold the dialogue on an annual basis.