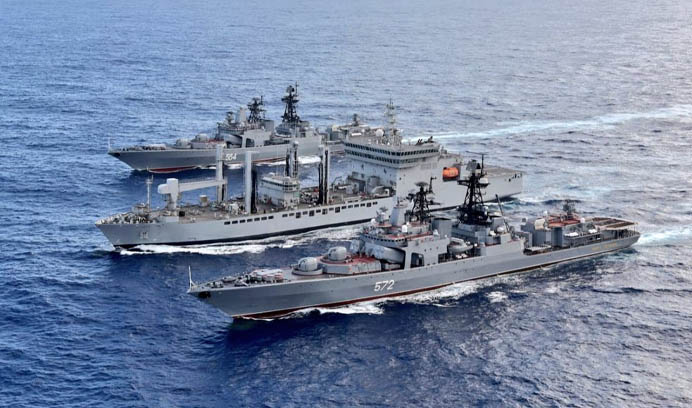 India’s guided missile destroyer Ranvjiay, frigate Sahyadri, and fleet tanker Shakti, along with their integral helicopters are taking part in the drills

The Indian and Russian navies held a two-day mega military exercise in the Bay of Bengal beginning Friday to strengthen their interoperability in managing the various security challenges, said a report by Sputniknews.com.

The 11th edition of the biennial exercise Indra Navy on Friday and Saturday (4-5 September) includes diverse activities across the spectrum of maritime operations, as per the online publication.

India has deployed guided missile destroyer Ranvjiay, frigate Sahyadri and fleet tanker Shakti, along with their integrated helicopters have joined the drills while Russian Navy destroyer, the Admiral Vinogradov and the Admiral Tributs, along with fleet tanker, the Boris Butoma of the Pacific Fleet, have participated in the exercise.

In July, the Indian Navy performed a military exercise with a US Navy carrier strike group led by the nuclear-powered aircraft carrier USS Nimitz off the coast of the Andaman and Nicobar Islands. The USS Nimitz is the world's largest warship.

However, New Delhi pulled out from the Kavkaz-2020 strategic command post exercise scheduled in Astrakhan in southern Russia from 15-26 September.

The publication further reports that the Indian Defence Ministry said that it will withdraw from the joint exercises in the wake of “pandemic and consequent difficulties in exercise, including arrangements of logistics."

China, Pakistan, Turkey as well as member states of the Shanghai Cooperation Organisation (SCO) will attend the Kavkaz-2020 military exercises. Media reports suggest that India’s decision was prompted by the participation of China and Pakistan in the drills.